Happy Publication Day to the lovely Helen Smith! Helen’s a real powerhouse in the scribosphere and her blogs show how an author should be “hands on” in getting their novels out there in front of the public. Make sure you check out her sites! Enjoy. 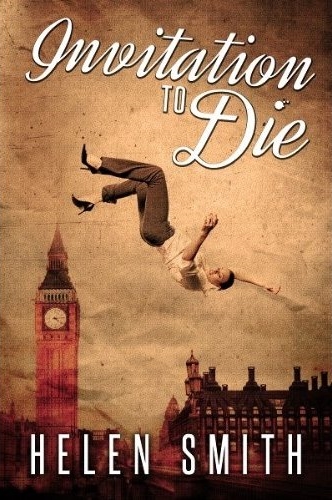 1) If you could describe yourself in 3 words, what would they be and why?

Why? Because no one else is ever going to describe me that way.

The first thing I ever wrote was a short radio play which won an award. By then I was already working on my first novel, so instead of following up by writing more radio plays, I continued working on the book. Other published books followed, but I also wrote some stage plays that were produced in fringe theatres, and some TV scripts that were commissioned but never produced. I love writing for theatre but it’s tough to make a living at it. I love the money people will pay you to write scripts, but it’s dispiriting to work on something knowing it might never be produced. At the moment I’m devoting my time to writing novels.

3) Tell us about your novels and what inspired them.

My first two novels, Alison Wonderland and Being Light, are offbeat, quirky comedies featuring a private detective called Alison who joins an all-female detective agency in Brixton, where I live. I had read an article in the paper about an all-female detective agency in Singapore where the women mostly followed unfaithful husbands. That’s the kind of work Alison does until she meets a client called Taron, an unpredictable, enchanting woman who is to become her best friend.

The Miracle Inspector is a dystopian novel set in London in the near future. It was partly inspired by my work volunteering as a writing mentor with a group of exiled writers through a charity called Freedom From Torture. I wondered what it would be like if I had to leave my home. Where would I go? Who would help me? That was my starting point. I came up with a blackly comic story about a young married couple, Lucas and Angela, who decide to escape London after England has been partitioned – with disastrous consequences.

I have recently started writing murder mysteries. I have always enjoyed reading them, and they’re great fun to write. The first full-length novel in my Emily Castles mystery series, Invitation to Die, features an twenty-six-year-old amateur sleuth who teams up with an eccentric philosophy professor called Dr Muriel to solve a murder at a romance authors’ conference in London. It is published by Thomas & Mercer.

4) What’s your top 3 bits of advice on the industry for novelists?

The most important thing is to finish writing your book. That’s the hardest part. But if you don’t have a finished manuscript, how will you ever get published?

My second piece of advice is to make sure you’ve really finished the manuscript before you send it out. Don’t make the mistake of thinking that an editor will sort it out for you. They may well give you notes on it, and of course they’ll copyedit it, but they will want to buy a finished piece of work, not something that shows promise.

Once you’ve finished writing your book, you need to get a good agent.

5) Describe a typical day for you.

I have got into terrible habits recently, just sitting there all day hunched up at my computer, not going out, not doing anything except writing (and looking at the internet). I’m determined to starting doing some exercise every day, and remember that it’s OK to stop for the day rather than carrying on until I drop. So I’m going to describe the typical day that I hope to have from tomorrow.

I’ll start with a walk to my local swimming pool where I’ll swim for forty minutes. Then I’ll come back home and write for five hours. Then I’ll stop work and see friends or watch something interesting on TV. I got Sky TV at the end of March because I kept hearing about all the great programmes on Sky Atlantic that I was missing. But I have only watched one thing on it so far: an episode of Game of Thrones. How many people do you know who need to watch more TV? Exactly. My new life starts tomorrow.

6) What’s the ONE thing you wish you knew before you became a novelist?

The journey doesn’t end with the publication of your first novel. That’s just the beginning.

BIO: Helen Smith is a novelist and playwright who lives in London. She is a member of the Writers Guild of Great Britain, The Crime Writers Association and English PEN. She is the author of Alison Wonderland, Being Light and The Miracle Inspector as well as the Emily Castles mystery series. She is represented by David Hale Smith at Inkwell Management, New York. She blogs at www.emperorsclothes.co.uk. She is on Twitter at @emperorsclothes.

The Women & Writing Series profiles inspirational women and their writing and/or related work on B2W. If you know of an inspiring female writer you want to see profiled here – or are one yourself! – get in touch. Tweet me, leave a msg on the Facebook wall or send me an email on Bang2writeATaolDOTcom Want more? Here’s a collection of tweets dedicated to Inspirational Women, as nominated by Bang2writers.