3 Reasons Why “Show, Don’t Tell It” Is Bad Writing Advice 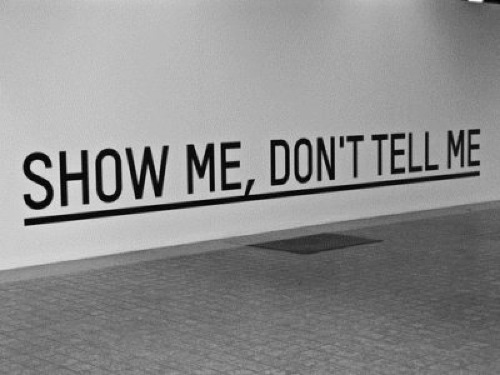 But on surface level, “Show it, don’t tell it” is NOT good advice, especially for those writers struggling. Here’s 3 reasons why:

1. … The phrase has become redundant and/or unhelpful.  Anyone who has spent even five minutes browsing the web about writing (never mind attended a course or written something) has heard the advice, “show it, don’t tell it”.  Just about every writer thinks s/he knows what it means … and that it DOESN’T apply to *their* work. I’ve lost count of the number of writers who have come to me complaining someone has recommended “show it, don’t tell it” to them – WTF? They’re not a newbie, y’know! “Show it don’t tell it” has become synonymous with “bad writing”. Of course no writer is willing to believe their writing is “bad”, thus anyone who recommends this supposed advice must be “wrong”. Basically, script readers, screenwriting tutors and article writers have given out this advice so often, the phrase itself has in essence become a shorthand way of saying, “start again”. This is not helpful, especially when writers aren’t sure *which* bits are problematic. What’s more, arguably “show it, don’t tell it” has become a “get out of jail free” card for poor feedback-givers who simply can’t be bothered to break a work’s problems down.  More on this, next.

2.) … It needs breaking down to specifics for the individual writer/work. Typically, “show it, don’t tell it” means your characters are saying exactly what they mean or want all the time, whilst probably hinting at their motivations, feelings and/or back story at the same time. For example:

KELLY: Make sure you swing by the shop and get some milk.

DAVID: I don’t have any money on me; I left my wallet at home. I can’t believe it; I’d forget my head if it wasn’t screwed on at the moment. I’m so stressed ‘cos of this presentation at work. My boss is looking to fire people.

KELLY: It’s okay, I went to school with Cheryl, the woman who works there; she’s the assistant manager. She’ll let you have it, just make sure you pay her next time you see her.

The above example “tells it” far too much because first off, we probably don’t need to know Kelly and David need milk anyway. If it’s not part of the “direct” story, then it is extraneous. We get the feeling they’re talking about the milk just so David can tell us he’s feeling stressed; also, we suspect maybe we’re hearing about Cheryl because she will figure somewhere in the story next. No thanks! So: CHOP, CHOP.

BUT there’s more than one way of being “extraneous”. ANOTHER way stories “tell” too much is by characters describing their emotional response or state too insightfully, with what we might regard “too much” emotional maturity, especially in the case of young people, but also characters of any age:

PAUL: Why do you drink too much?

KEITH: I started drinking when I was fourteen. Looking back now, I see it was to numb the pain. My parents never cared about me and were always working. There was this one guy who supposedly took an interest, but he was grooming me. Before I knew it, he was abusing me. I couldn’t tell anyone; I felt too ashamed. The abuse stopped when I left home, but I never went back. My parents never got why. Now I have my own son I live in fear of it happening to him.

The above will happen in genre screenplays, but especially in personal dramas and YA novels. In other words, characters will name their pain very obviously, maybe even returning to it over and over, with various other characters facilitating this by asking them questions about how they feel.

BUT AGAIN: whilst an over-reliance on general dialogue or and/or over description to “break open” characters’ motivations, feelings or  back story are the most common reasons for “show it, don’t tell it”, there are others too, such as:

– A dedicated character whose job it is, sometimes literally, to facilitate the lead’s emotions: this especially happens in the case of doctor, counsellor or therapist characters, but also best friend and mentor characters, plus wives/girlfriends.

– An “overtelling” via some kind of “back story as prologue” (especially a traumatic event) before the story “really” begins in order to set up the main character, especially one that is otherwise standoffish or isolationist.

– In screenplays, a reliance on scene description that is too detailed, in the mistaken belief these random objects – frequently photos or jewellery, but also mementos of trips to the seaside like shells and stones – will give us a supposedly visual insight into a character’s mindset or motivations. Frequently these will join up with that “overtelling” of that traumatic event mentioned previously. In the case of novels, a tendency to overly describe various tiny details (especially weather, but also the rooms characters are in) may also create a similar problem.

– A reliance on a character with a special need that means other characters need to speak for them (for whatever reason, but especially via sign language or a because another character cannot speak English). This may mean potential jeopardy or tension in the scene is lost because too much “translating” is going on.

… And the list goes on. As you can see, merely saying “show it, don’t tell it” to a writer is not very illuminating. They need it broken down by a script reader or editor WHERE the problematic areas are; WHY they present a particular issue in the story that is being told and WHAT they might want to consider by way of tackling them.

3.) … Sometimes you NEED to tell! Any form of creative writing, whether screenwriting, novel or short story, needs a sense of balance. This means that a) yes you need visuals b) yes you need subtext but c) yes you need to be OVERT at times, too! Whilst it’s obviously not desirable to have characters saying exactly what they mean all the time, or handling weird and random objects, or naming their pain with pinpoint accuracy, occasionally a well-timed moment of dialogue and/or action that underlines its deeper meaning work BRILLIANTLY. What’s more, it’s typically these moments that get remembered, because they have the ability to take the reader or viewer’s breath away. The key is knowing when these moments can work and why – and not overdoing it. Yet so many writers (and script readers and editors) have swallowed “show it, don’t tell it” WHOLE, which means these potentially devastating and/or amazing moments of raw truth or emotion get chopped. Such a shame.

So, next time someone gives the feedback “show it, don’t tell it” — TAKE A DEEP BREATH.

Could the reader mean one of the problems listed above? Could you be trying too hard with subtext; overtelling back story; or having your characters say too much? Or could the reader have jumped the gun on that notion of “raw truth/emotion”?

It’s your work. You decide.

25 thoughts on “3 Reasons Why “Show, Don’t Tell It” Is Bad Writing Advice”

previousSubmission Horror Stories: 29 Ways NOT To Submit To An Agent
next5 Reasons Writers Should Consider Working As Background Artists (“Extras”)