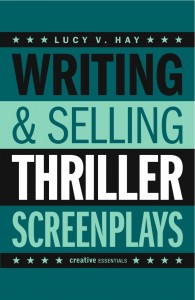 Many thanks to Natasha aka Script Smart for tagging me in this Blog Hop, which consists of   ten questions and then tagging other authors/writers. So here’s mine:

1. What is the working title of your next book?

I’m currently editing WRITING AND SELLING THRILLER SCREENPLAYS. It’s a non-fiction book about, oh – you can probably guess. At the moment I’m contacting all the industry peeps I can think of to contribute quotes on either writing or selling Thriller screenplays, so readers can have as many great insights as possible from the industry.

2. Where did the idea come from for your book?

Kamera Books have a great range about screenwriting and filmmaking called Creative Essentials. Kamera Books’ representative Hannah said she wanted to have a whole library of genre-centric books and wondered what genre I would be interested in writing about? I didn’t have to even think about it, I replied straight away: Thriller. It’s such a versatile genre; there’s nothing it can’t do. I’ve tried to include all the major “biggies”, but strived to include hidden gems or ones that have been forgotten in the mists of time too. It is a real love letter to the genre and I’ve really enjoyed writing it.

3. What genre does the book fall under?

Non-fiction. The purpose of the book is not a “How To Screenwrite” – it assumes the reader knows the basics, like formatting. Instead it talks about concept and premise and how the best Thriller specs use this to “underpin” everything on top in a way that gives them the best possible chance in the marketplace. I also talk about how writers can make things happen for themselves, especially via creating relationships online. My intention is that this book is not *just* for those writers who want to attempt a Thriller, but all writers who want to take their writing – and career – seriously.

4. What actors would you choose to play the part of your characters in a movies rendition?

Well it’s a non-fiction book so wouldn’t really apply, but then Charlie Kaufmann would probably disagree, so I guess someone could play ME in the shouty lifecoach role: “Your concept’s misfiring! Back to the drawing board! Rewrite!” Who?? Let’s say … Toni Collette with a megaphone.

5. What is the one sentence synopsis of your book?

A comprehensive look at writing and selling in the Thriller genre, from initial concept to finding the money to make it.

6. Will your book be self-published or represented by an agency?

My representation is Julian Friedmann. The book will be published by Kamera Books’ Creative Essentials range in the English Language, Europe and the US.

7. How long did it take you to write the first draft of the manuscript?

About six months. I’m technically not finished either ‘cos I keep remembering stuff I want to put in. I daresay I’ll give it in and then go, “Argh! How could I have forgotten [yet more]?”

8. What other books would you compare this story to within your genre?

I tried to write the book in the style of this blog, but with more detail. I didn’t want it to be too dull and dry, but equally I didn’t want it to be too fluffy either. I don’t see the point in **not** telling it how it is, but at the same time I do want to inspire writers because I honestly believe anything is possible. Ten years ago, I was a single Mum working out of my kitchen in Devon. I’ve never lived in London. My philosophy is, “You want it? Go get it” so the book contains tips on how to do this, too.

9. Who or what inspired you write this book?

Over the years lots of my Bang2writers have told me I should write a book about screenwriting, so I would say they have inspired me. B2W is what it is today because of them.

10. What else about the book might pique the reader’s interest?

As with this blog, I talk a lot about gender roles in film in the book, which I think is a really important element of screenwriting and one that is frequently undersold in a lot of spec screenplays, especially Thrillers but also Horrors and dramas. I don’t just talk about Women In Film either, but also the notion of “idealised” masculinity, which can be damaging too, albeit in a different way. I also talk about film finance, branding, networking and social media a lot too, which I think far too many writers underestimate in creating their careers and sustaining them.

Tagging for the next blog hop:

Alison Lucy – aka Alison Bond, Alison is the author of four novels and counting! Visit her website here.

Astrotomato – Astrotomato is the author of three publications: Ayla’s Journey, a dark children’s fantasy; Dark Things, a collection of dystopian flash fiction & short stories; and Planetfall, his debut novel, which is a science fiction thriller. He lives near Horsell Common, where the Martians first landed in HG Wells’ War of the Worlds and works in the environmental sector.

Michelle Goode – script reader/editor and writer in her own right, Michelle owns the SoFluid Script Consultancy and is an integral member of the Scribosphere, tweeting, blogging and talking about writing 24/7!