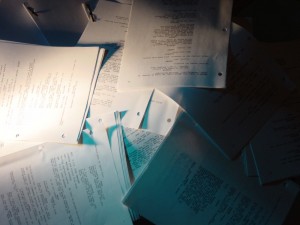 I always try to give an insider’s guide to the spec pile on all LSF contests or schemes I head up, so here’s this year’s Script Labs 2012. We got 250+ applications from those people signed up for this year’s LondonSWF, so it was great to see people grabbing this opportunity with both hands for the most part. So while we wait, here we go …

… First, the stuff surrounding the submissions:

Email address. It’s hard to believe, but I’d venture about 40% did NOT include an email address ANYWHERE on their application. This meant I had to copy and paste their email onto their files and if this wasn’t possible in the case of PDFs, even onto the file names. You must ALWAYS include your email address! Don’t imagine because you are submitting via email, we can necessarily keep track that way – your application is being sent all over the place via the LSF Dropbox. If you want a notification whether you’ve been successful or unsuccessful, you NEED to include your email address because after the third successive year of having to do it, I am not going to bother copying and pasting next year – you have been warned!! ☹

Pseudonyms. We always get a few writers submitting who write under pseudonyms, but this year there was a significant increase. This isn’t an issue – but becomes a big admin headache when writers submit under their REAL names but attach scripts etc with the fake name as it means I start worrying I’ve missed somebody out and end up hunting for an extra person who doesn’t exist. My advice: if you write under a pseudonym, please SUBMIT UNDER THAT NAME ONLY. This includes setting up a gmail account (or similar) *with* that pseudonym.

Incomplete applications. As usual, there was a significant number of writers FORGETTING to attach stuff that was asked for – most people who forgot, forgot their pitch doc. I spent a long time chasing people up for them. This wouldn’t happen in the “real world” beyond competitions, you’d just miss out on your chance. So definitely worth checking before you press “send”.

Wrong files. Most people adhered to the submission guidelines which stated files had to be PDFs, .docs, .docx, .rtf or .fdr. However a small minority tried to submit Movie Magic Files and Pages files and one chap even sent a link to his files on some online screenwriting site!

Title Page. Again, hard to believe, but I’d venture about 10-15% included no title page – it either wasn’t there at all or was left blank. TIP: Title pages are 100% necessary & NEVER count towards page count.

Copyright. There may have been no sign of email addresses or even title pages, but the  was EVERYWHERE!! What did you lot reckon me and my readers were gonna do: grab your scripts and pitch docs, rub them all over ourselves and run off cackling into the sunset yelling “I’VE STOLEN ALL THE IDEAZ LOLZ”??? Stop worrying about copyright FFS and check out this post on it. Worry instead on giving readers WHAT THEY ASK FOR.

Format. About 95% scripts LOOKED fine, but there was still a small but significant number of scripts not in spec script format. I tried to give everyone who submitted outside the format a chance to resubmit if there was time, though obviously if they submitted right on the deadline, this wasn’t possible. A complete run down on Format.

Miscellaneous. Some people copied and pasted their pitch docs into the body of the email, meaning I had to then copy and paste their text into a Word Doc, which really got on my nerves (and I won’t be doing again either!). Some writers’ files corrupted in transit, so it’s always worth sending to yourself at the same time to check this when submitting via email. Last of all, a few people saved their applications as ONE file, which was really helpful, thanks very much!

So now … for the stuff surrounding selections & applications:

Selections. For those asking/interested, selections are being made by me and my trusty team of readers (Hi Sal and Sam – so that’s Steve Ince, Gub, Justin Young & Stephen May); or me and the leader of that Script Lab (Gregor Sharp and Luke Ryan); or just the leader himself (Philip Shelley). We’re aiming to turn the selections around in about a week, hopefully less, but won’t be able to notify people before the pitchfest opens for registrations on 15/10. If you ARE selected for a Script Lab and happen to be pitching at the same time, then presumably you will either have to find a delegate to swap your pitchfest with, or make a decision on which you prefer to let go. But cross that bridge when you come to it, would be my advice.

Applications. Multiple applications were allowed, with most people making more than one application and some people making as many as 3 or 4, though no one applied for every single one. This meant we received in excess of 250 applications at least, to be honest I lost count today and I’m STILL downloading . I can scarcely believe it. Keep your eye on my Twitter and Facebook page for the official numbers later tonight.

Male/Female Applicants. I didn’t keep a record of numbers because of the deluge of entries, but even allowing for names that were unisex or ambiguous, I’d venture it was an approximate 60/40 split in women’s favour. LSF has the highest number of women entrants I’ve seen anywhere, so it was great to see this tradition continue.

Pitch docs. On reviewing the spec pile and the high quality of the script pages in general, I decided it would be a good idea, on balance, to make the pitch docs the focus of the search for Script Lab applicants. This is because very frequently scripts do not speak for themselves, but pitches do – they make the difference between your screenplay getting requested (or not, as the case may be). Also, with 6 participants and just 3 hours of time, it’s likely (as I found out last year) that Script Lab leaders will end up discussing concept, rather than workshopping actual script pages.

So, that’s that for this year’s “insider view” on the Script Labs! . As ever, we will try to notify EVERYONE, not just those selected. If you’re a London Screenwriter’s Festival Delegate who applied for one of them, then you should hear in the next week (by roughly Oct 21st) whether you have a place or not. Good luck!

And now down to the reading!!! All applicants should know either way about the success of their application by 21/10 – hopefully before. Good luck everyone!