Many thanks to Alison Lucy (who loves me so much she changed her name!) for reporting back on yesterday’s LondonSWF Breakfast Club which featured top script consultant Dara Marks, who will be at the main event London Screenwriters Festival at the end of this month (buy your ticket here, with £22 off, quoting BANG2WRITE). Can’t wait! 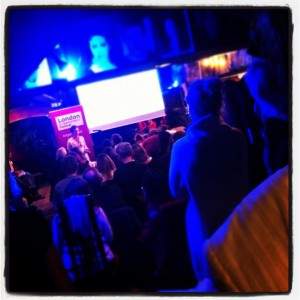 This morning I went to The Breakfast Club, a screenwriting event ran by the team that bring you The London Screenwriting Festival. The formula is simple, a slap up breakfast and an interesting speaker, this time it was lauded script consultant Dara Marks.

First the breakfast. I had fruit, cheese and toast with butter, everything was fresh and abundant, I didn’t see any juice, I did see a croissant but I couldn’t work out where they were and I was already trying my hand at networking, although I managed to go back later for more toast and a random bit of bacon (screenwriting wisdom or not £16 for a smorgasboard breakfast in this part of London is good value, cheaper than the breakfast at my hotel.)

My published novels carried little weight with this crowd, I am at screenwriting base zero and it shows. Mostly I love how film people are, on the whole, a little scruffier than book people, more sartorially relaxed, the idea of high fashion tends to be Converse. There was a sense in the packed room that we were among our tribe, or our competition, depending on how you choose to look at it. (I stole this line from the woman sitting next to me, didn’t catch her name.)

I enjoyed Dara Marks’ section of the morning. She is at heart a structure devotee and judging by the ironic ‘wooh’ that went around the capacity crowd when organiser Chirs Jones announced a one-off event at the Barbican with Robert Mckee, these were Dara’s people. Engaging The Feminine Heroic is for Dara about connecting with the moist dark earth that resides in all of us. It is where are roots are, supporting the tree, an underworld where the horrors go to be processed, the struggle from which our achievements grow. It exists side by side with the masculine story, the tree, the ego, the action, because something is always sacrificed when we act. Getting out of bed, for example, suppressing the desire to stay in bed. Horror and essentialness being held side by side. A character’s depth is how they process the disappointments.

I would have loved to stay to hear what Deb Norton had to say on the subject but the event was running over and as ten o’clock came and went I started to get anxious and irritated. I have two children and I don’t live in London, and the plan I had worked out didn’t allow me to stay. When I left I felt disruptive and disrespectful, especially as it may have seemed like myself and the three of four others who left with me were only interested in the top of the ticket. I felt bad for Deb Norton. But mostly I felt bad for myself, I was going to miss more cool stuff just because I booked the wrong train, sucks to be me.

So bitter was the taste all this left that on the way home I looked up Deb Norton, apologised via Twitter, and found out that Deb and Dara are both from Ojai which is the location of my dream house (Reese Witherspoon already lives there.), I found Deb’s amazing website PartWild.com and so I feel more connected to all of this as a direct result of my frustrated, inelegant departure, and that, as far as I can figure it out, is what the feminine heroic is all about.

I am very grateful to everyone, but especially Lucy, for this fantastic start to my day.

Next month’s speaker at The Breakfast Club is Lisa Albert, who will be discussing Writing & Producing MAD MEN on Tues 30th October. Not to be missed! Tickets just £16.