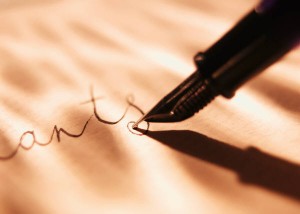 I was one of those odd children. I wrote to professional writers. A lot. Mostly I asked them things like, “What’s it like, being a writer?” and “How can I be a writer?” Most of them didn’t reply.

Then one day I got a reply. It was from Jimmy McGovern. It read simply,

“Lucy: if you want to write, you will write.”

I was about fourteen. I read it multiple times, sure I must be missing something. But I couldn’t figure out what it was, so like a typical teen I got the rage. He hadn’t told me anything!

Then I forgot about it.

It’s only now I realise the truth of Jimmy McGovern’s words. Like he said, I wanted to write. And I did, despite what happened to me – or didn’t. It was the one constant in my life, other than family. So by the law of averages, if I kept going long enough, *something* would happen for me. And it did.

People often send me emails, messages and tweets expressing the belief they *can’t* get anywhere in this industry. Sometimes they will blame a lack of money or prospects; most of the time they blame other people – script readers, producers and agents being the favourites for supposedly keeping them “out”.

But we’ve all been there. No one leads a charmed life. Even those people who you’re *sure* had it easier somehow than you. They didn’t. They had to work every bit as hard as you’re having to.

Fact is, if you want to write, you will write.

No matter the barriers.

No matter what happens in your life – or not.

Want it enough? You’ll do it …