Have Script Levels Improved Over The Last Decade? 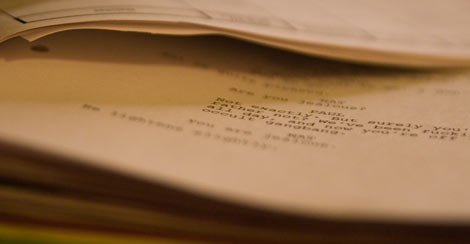 At the weekend, James DeMarco asked me on Twitter:

“With the proliferation of online script analysts, screenwriting advice, etc in past decade, has level of submissions improved?”

Teenie Russell very helpfully put the whole Twitter thread on Storify, which you can view here. As you’ll see the conversation went on to such things as career advancement, development and peer review, so I thought I would expand here.

Same old, same old. I’ve been reading scripts for over ten years now and can confirm that despite script advice being everywhere, the same problems with character and structure remain in the spec pile. Problematic character motivation and features in particular “running on the spot” appear to have changed very little, especially in early drafts. As I always say to people who want to be script readers, you will write more about character and structure than anything else in coverage. I don’t see that ever changing though, so I wouldn’t say this is a massive problem per se.

Imitation, not innovation. It’s always been the case that something that does well commercially creates a “zeitgeist” of similar scripts, but there seems to be more imitation in the spec pile, especially in the last three or four years. Perhaps this is because writers are trying to write for the market more having seen various bloggers get successful; or perhaps they’re going with their first ideas, unaware they’ve been subconsciously influenced by something already saturating the marketplace? Maybe the internet or social networking is doing the influencing.

Identity crisis. Scripts ten years ago were frequently dramas in the Ken Loach style: very depressing and bleak, probably a 15 or 18 style rating, with a strong identity and sense of audience (albeit niche). I’m glad to see many more writers trying their hand at genre pieces, but unfortunately this has meant many writers forgetting to nail down who their audience is.

Cliche Alert. Interestingly, cliches appear to have stayed fairly static over the last ten years or so, especially cliched openers. Perhaps writers have to work their way through the cliches first in order to find something new?

Girls On Film. I’ve seen very little change in the numbers of female protagonists, especially in features. Again and again too, writers appear to confuse the notion of a “strong woman” with the notion of a male character with the gender changed – especially in the case of kickass hotties or female Casanova types.

So that’s the bad news.

The good news then:

TV-A-Rama. Ten years ago, I saw features and the occasional short or treatment. That was it. Now the spec pile is alive with an array of sitcoms, TV pilots web series, pitches, series bibles and transmedia as well. That’s a particularly welcome change.

Feedback-A-Go-Go. When I started reading, typically writers wrote and sent off, with no feedback. And it showed! Now writers KNOW their first draft is not their best and get peer review on their work in the very least. Sure, getting feedback can be a hit and miss affair, even with paid-for readers, but I rarely see the clangers I once saw, the right format being the most obvious, so scripts nearly always at least look better than they did ten years ago.

Opportunity Knocks. When I started reading, there were a handful of initiatives and places writers could send their work. Now that market has EXPLODED and there are more places, contests and initiatives than ever before. Most days I’m posting various opportunities – paid/collaboration, paid-for & free – to Bang2writers. (Of course, some say it’s wrong that writers have to pay for some, like contests, though I would point out they create deadlines, no one forces writers to enter and people do have a right to be paid for their time in sorting through the masses of entries. It depends where you’re coming from – and if you really disagree with paid-for opportunities, don’t enter them; there ARE lots of free opportunities too and collaboration with others is a viable option all year round).

Strategy Counts. Writers are waking up to the fact it’s not *just* about writing a great script and waiting for the £ to roll in. Writers are developing their own strategies for getting their work out there and making relationships that really get them somewhere.

GOOD writers get better quicker. That’s right: talent may not be taught, but craft is honed and with all this advice at talented writers’ fingertips, the good writers are advancing quicker than ever before. That has to be good news.

So, HAVE scripts got better in the last ten years? IMHO, yes and no. But I’d venture WRITERS THEMSELVES are much better: they know what they want and they know how to get it. So go for it!

2 thoughts on “Have Script Levels Improved Over The Last Decade?”

previousQ: How Do You Script Edit A Script Without Rewriting It As Your Own Story?
nextQ: What Are The Differences Between Features & TV Pilots/Series?