Are You On The Write Path? 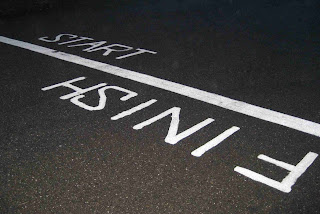 When I was a child, I wrote to the journalist Julie Burchill and told her I wanted to be a writer. She wrote back with:

Are you sure? Better to be a vet.

I thought she was nuts and promptly forgot all about it.

Later, I decided I wanted to be a screenwriter. I did the BA (Hons) Scriptwriting for Film and Television at Bournemouth University and during the course of my dissertation, I interviewed a stack of working screenwriters at various stages of their careers. Each time I asked them the question, “Why be a screenwriter?” every single last one said a variation of:

“You have to be nuts to be a screenwriter.”

But I still wanted to be a screenwriter, nuts or not, so I pressed ahead with it. I went into corporate work first and did quite well, so figured I had it all in the bag as far as “making it” was concerned (ie. if I kept going, everything would be okay). And in one sense it was: I got read, I got good feedback, I collaborated, I got involved… But I kept falling at the last hurdle, whatever that hurdle was: competitions. Filmmaking. Trial scripts for television. CLOSE BUT NO CIGAR.

Throughout this journey, three people – one of which was my Mum, the other two shall remain nameless – told me I was meant to be a novelist, not a screenwriter. I always wanted to write a novel, but I just couldn’t find the “right” idea…

… Because I was too busy trying to grab the scriptwriting thing with both hands.

Then I let go of it.

Suddenly I could find the “right” idea for the novel that had eluded me for years. I sat down and wrote it.

And sold it, a month after I finished it.

It’s kind of a mad story, really. I kind of wish I’d stuck with novel writing in the first place – it was what I wanted to be as an eight year old – but then perhaps I’d have always wondered about screenwriting and that said, there will always be a part of my heart devoted to screenwriting (as long as it’s my own stuff!). Shame about all the heartache and soul searching, wondering if I was “good enough”, though; not to mention the confusion, as people and places told me I was a “good writer”, yet “not right” for them. I know why now, but back then it was hard to deal with.

There are so many paths to “get there” in life and writing is just part of this. If you find yourself tied up in knots over writing, perhaps it’s because you’re on the wrong path somehow. I spent ages making the decision to go for novel writing over scriptwriting, yet once I made it, life changed irrevocably very quickly.  Sometimes it takes more guts to let go of something than doggedly carry on regardless.

So *if* there’s something you want to do instead of this screenwriting madness, go for it. Who knows how it’ll turn out?