There’s lots of great books out there on writing, but which ones should you choose? Angelita steps in with her thoughts – and they’re not the “usual” either! Check ’em out. 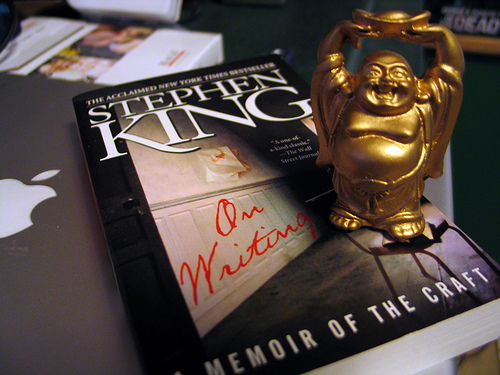 Listen: we know a novel is not a film is not a play is not a TV show. Each narrative medium works us over in different ways and possesses its own unique strengths. Nevertheless, the history of each is littered with successful adaptations (typically the newer medium cannibalizing the older one – though that’s been challenged with movie-based plays like The Producers, have you ever seen a film novelization that anyone takes seriously as a book? My apologies to Star Wars readers).

Obviously there are some core laws of storytelling, a wealth of methods and techniques that are transferable across different forms. We’d do well to make a close study of the novel, which remains today our richest and most well-developed narrative tradition. It has a lot to teach us about writing for film, television, comic books, or video games, even as we must always respect the essential differences and advantages each brings to the table.

Here are four of my favorite books on writing fiction. There are many, many more, of course, and I gobble them down like candy, but these are the ones I found to be the most lively and useful:

Burning Down the House: Essays on Fiction by Charles Baxter

This amazing collection is organized thematically to highlight various aspects of the writer’s craft, but not the usual bland “plot,” “setting,” etc. Chapters like “Counterpointed Characterization,” “Rhyming Action,” and “Against Epiphanies” will provoke and enrich your understanding of some of the most potent weapons in the writer’s arsenal.

How Fiction Works by James Wood

This is an intensely enjoyable book to read because of the amount of personality and passion put into it. Unlike the other three authors on this list, Wood is not a novelist himself but a literary critic, yet by no means a jargon-bound theorist: rather, he resembles an old-fashioned gentleman of letters, full of opinions and witticisms. You can practically smell the pipe smoke and hear the creak of leather as he leans forward in his chair to share the nuggets of wonder he’s discovered in Dostoyevsky or Saul Bellow. Totally charming and brilliant.

The Half-Known World: On Writing Fiction by Robert Boswell

It’s been my pleasure to take a couple of writing workshops with Mr. Boswell, and he’s one of the best teachers in the business. Very stern and purist in his conception of literature, he represents the old guard of genre-phobic literary writers, but he comes by it honestly, crafting emotionally honest and piercing stories in the tradition of Chekhov. Still, he’s written one pseudonymous sci-fi novel (labeled “cyberpunk,” a term he confesses to not understanding, he says it’s made more money than all his “serious” work put together) and he has a chapter on detective fiction here. Highly recommended for its sharp insights into what moves an audience.

On Writing by Stephen King

“Of course I’m respectable. I’m old. Politicians, ugly buildings, and whores all get respectable if they last long enough.” Recognize that quote? If you’re a serious screenwriter, you’d better; it’s from probably the most acclaimed screenplay of all time, Robert Towne’s Chinatown. I like to think that Stephen King wouldn’t mind me applying it to him. A juggernaut of popular fiction, King has survived decades of jealous highbrow jeering at his enormous and macabre output, and can rest easy as a real living legend of American fiction. This remarkably good craft book put to bed any conception of King as a hack; it’s filled with canny advice, fascinating anecdotes, and an overwhelming compassion for the struggles of those who choose to write

Angelita Williams writes about a variety of topics pertaining to education. Angelita has a particular interest in online education, as she covers many stories on online courses and the distance learning lifestyle. Her email is angelita.williams7@gmail.com.

previousReading Screenplays by Lucy Scher – Review & Giveaway
nextAre You On The Write Path?