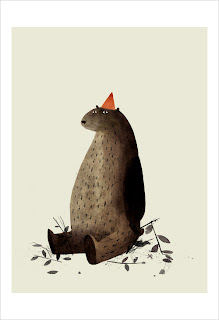 A GREAT guest post from Bang2writer Ezra here, with some fab advice and writing exercises for screenwriters… Let the other Bang2writers know how you go if you give any of them a shot. Thanks Ezra!
————————-
Picture books, you say? I am writing a Lynchian take on the Western. I’ve completed character biographies, a beat sheet and a coloured coded layout of my three act structure. Surely there is nothing for me to learn from plucky little steam engines, children who do not wish to sleep and an array of cute baby animals who are unable to locate their mother?

Think again. Amongst all the pluck, insomnia and abandoned chicks are some fantastic examples of storytelling. Still not convinced? Consider these points.

Less is more. Pictures books usually tell their tale in under eight hundred words. Often a lot less. This means we’re talking about a simple story and as a screenwriter that’s generally what you’re looking for regardless of how you aim to set out the plot.

Characters rule. With the stories being simple it’s often the characters that make a picture book stand out. You won’t have a lot of words to create these characters so they will necessarily be defined by their appearance and more importantly by what they do. As a screenwriter you should always aim to let your characters define themselves by their actions.

The goal is clear. A colourful character may grab a child’s attention but to keep that attention the point of the story has to be very clear (more often than not it will be the book’s title). As a screenwriter you too need to set up your audience’s expectations as early as possible. Fail to do this and their interest will wane.

So there you have it – a simple story with an interesting protagonist and a clear goal. Nobody is going to complain if you turn up with a script that fits that description. Now, of course good storytelling is good story telling regardless of the form it takes, but picture book texts have two very specific things in common:

Firstly, both are created in a written form but are intended to be read out loud. It’s easy to forget this as you sit hunched in silence over your laptop. It’s also easy to forget that both are intended to be read out loud to someone. ‘Write for yourself’ is a lovely maxim but unless you’re rich enough to finance a film yourself (Hi there) you’d best keep your audience in mind.

The second common area is that (presuming the writer doesn’t double up job-wise), both must hand over their writing to be interpreted by someone else in the form of images. A picture book text on its own will tell a story. The illustrations will add a whole lot more and if it’s a good picture book the two combined won’t double up on information. The pictures aren’t there to slavishly replicate the words in image form. The text and image work together to tell the story. A good picture book writer will know what storytelling work to leave to the illustrator and so a screenwriter should know what to leave for the director and his or her team. A picture book has no more than a few sentences to represent a picture. That picture should be filled with action, take the story forward, add character detail and most importantly, compel the reader to turn the page to see what comes next. Manage that kind of density in your screenwriting and your script will be brimming with life.

To take you on a slight digression, let me tell you about the time when I found myself stuck in an uncomfortably small room with an angry Irish script consultant. After several hours of editorial abuse (which oddly ended with him lamenting not having spent enough time with his children), I stumbled out taking with me one annihilated script, one battered self-esteem and one very useful piece of writing wisdom:

The absolute worst thing you can have as a writer, he told me, is too much freedom.

One way to restrict yourself of course is by limiting the number of words and images you can use, so why not try writing your screenplay as a picture book? It doesn’t matter if it would make for the most inappropriate picture book of all time. You’ve got no more than eight hundred words and instead of twenty four images a second you’ve got twenty four images total. Try it and I bet you come up with some great ideas for your script.

Still unconvinced? Then I think it’s time we brought in the bear. Bears are always popular in picture books. This is because bears are great. Obviously in real life you get too close and they may very well rip your head off. In the generally less gory world of children’s picture books however, they appear to be the Meryl Streep of animals, able to inhabit just about any characteristic the author wishes to bestow upon them. In Jon Klassen’s wonderfully deadpan ‘I Want My Hat Back’ you could describe the bear as bereft. He has lost his hat. He loves his hat. He wants it back. If you’ve not heard of it, the book is a BIG hit in Picture Book Land. Here are a few reviews.

“The joy of this book lies in figuring out the explicit plot from the implicit details in the pictures, especially a few wordless ones.” –Chicago Tribune

Now did you read that my screenwriting friends? Picture books can have subtext.

Any of you pulled that off in one of your scripts recently? Klassen’s straight-faced animals are actually a fantastic lesson for anyone who wants to tell stories with pictures (and just in case you haven’t got it yet, if you’re writing screenplays then that’s what you’re doing). The reason Klassen’s blanked-faced animals are the cause of such delight, is that combined with the set up and the minimalist dialogue they allow the reader to work out some of what’s going on rather than having it laid out for them. Essentially, for all you fans of Russian Film Theory, we’re talking the Kuleshov Effect in full effect in a picture book.
Understanding how context influences your audience’s interpretation helps reduce overwriting and can turn an average film into a great one.

What’s really great about Klassen’s book is that he has respect for his audience. Never underestimate how enjoyable it can be for the reader when you let them do some of the work. If you’ve ever read a lift the flap book with a baby then you will have seen this on a simple but delightful level.

Klassen’s bear has been the subject of many reviews and analyses and I’d recommend you try and read some of them. From our point of view however, the most important thing to consider is that the book has inspired cries of ‘Again!’ from readers around the world. Films might not achieve quite the same repeat factor as picture books but there’s never an excuse for not aiming for some hand-clappy, ‘damn that was good’ delight from your audience. I’ll leave you with a quick non-definitive picture book inspired checklist for screenwriters:

1. We’ll start with the obvious one. Make sure your film has a ‘hat’ otherwise your ‘bear’ is just going to be standing about aimlessly, wondering if he’s wandered into a Beckett play.

2. Screenwriters are often advised to read their script out loud. Really, you need to ‘tell’ it out loud to a real or imagined audience so that you really think about how to keep their attention.

3. Check your sentence to picture ratio (and then reduce it). You do not need three paragraphs to describe your hero’s bedroom.

4. Give your audience some flaps to lift. It’s up to you if you satisfy or confound their expectations of what is underneath.

6. Find a way to add a bear. Really, bears are great (just don’t steal their hat)

ABOUT EZRA: As a writer/director Ezra Paris’ career highlights include receiving a ‘best short film’ award from Harold Ramis and having one of her films screened before The Muppets. She continues to writes scripts for all ages and when she grows up she would like to write a picture book.