Get What You Give 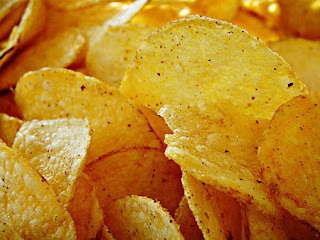 As a society, we teach children that if they want something, they should give something to get it.

At my school, this was signified most by “one for one” – in other words, if you wanted a crisp from someone else’s packet, then you gave that person one of yours, so you could get one of theirs in return.

Nine times out of ten this worked very well. But every now and again, that other child would grab *your* crisp, scoff it, then refuse to hand over one of theirs. THE OUTRAGE! I remember one particular incident beginning with a “one for one” transgression like this that became ALL OUT WAR – by the time it had finished, several months had passed as well as a campaign of terror that encompassed four other girls and a full-on stabby attack with a pair of compasses (we were eight! And it *was* quite blunt – no blood was drawn… Yes, yes *fine*… Though we WERE in big trouble and we spent the rest of the term drawing circles around a bowl instead because we quite rightly couldn’t be trusted).

The Media doesn’t tend to include casual playground violence in the same way in my experience, but the politics are still the same. You take something from someone, without due care? You’re not going to get very far.

“But I have nothing to offer!” Bang2writers might wail when I tell them to offer stuff in return, when other people offer to help them.

Whilst it’s true a new writer may not have the writing experience or contacts of a more seasoned writer, this does NOT mean they have nothing to offer. Think instead of the skills or life experience you have from being YOU that may help that other writer somehow.

An example: years ago, when I was starting out, a writer I recognised advertised on an internet bulletin asking for some advice on shotgun ammunition and how it would respond in a certain situation. I grew up in the country and had some basic knowledge of the issue the writer was describing, so I fired off an email to him. As a result, he wrote back thanking me and though we have never met in real life (despite a few near-misses), we have stayed in touch since.

Just imagine if I had thought, “Oh no, I’m just a newbie. I don’t have anything to offer.”

We all have something to offer, whether a newbie, seasoned or pro. So give it, “one for one”.