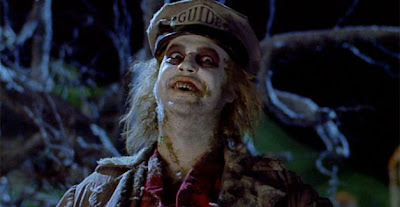 This post is inspired by  two separate Twitter conversations over the last two weeks between myself and Michelle Goode & Claire Yeowart and then Hina Malik – so stand by for some serious musing.

Years ago I attended a conference held by The British Board of Film Classifcation (BBFC). It was a very interesting  – and of course the notion of film censorship reared its head. Since the majority of us in the room were students, many of us expressed outrage that censorship existed at all; we claimed that as artists we should be “trusted” to make the “right” stuff. The chap speaking – I’m afraid I don’t remember who it was – accepted our point with the weariness of someone who had had this point put to him OVER AND OVER again and made the very good counterpoint:

“Is it actually the makers or the audience who is important here?”

I didn’t know what he meant at the time, I just remember writing this, circling it and adding “WTF?” in bright neon pink letters next to it with the highlighter I had bought especially for the occasion. Then I promptly forgot all about it.

Fast forwards approximately a decade and I know EXACTLY what that guy from the BBFC whose name I cannot remember means:

It’s the audience that is important.

Well, durr: you say. That’s obvious. But is it? After all I have already written countless times on this blog about the specs that don’t have a discernible audience, thus lack an identity. I have also written about how Hollywood knows its audience very well and caters for them, despite being maligned for it (and the audience being maligned too). I have even written about how there are *obvious* elements that take movies out of various audiences’ reach, like excessive swearing.

What I have NOT written about is WHAT an audience wants can CHANGE and not only that, our RESPONSE changes to that AS WELL.

Let’s take a movie as a case study: BEETLEJUICE. This movie came out in 1988 when I was approximately 8 or 9 years old. The movie was rated 15, but my parents were liberal and besides, it looked pretty fun with a cartoonish Michael Keaton on the front, a house and a spooked Geena Davis and headless Alec Baldwin, where’s the harm?? 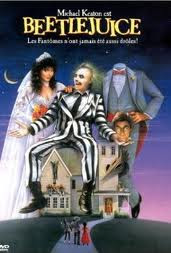 So I watched the film. And saw the following:

·      Multiple depictions of suicide or murder (a hanged man, a woman with slit wrists, another woman with a slit throat)

·      Mulitple depictions of the occult, especially séance and voodoo

·      Depictions of brothels and prostitutes

Perhaps I was an odd child, but I didn’t find any of this weird or scary. In fact, I loved it. I thought it was hilarious. So hilarious I went and fetched my Dad and told him he should watch it. He did and also thought it was hilarious (maybe that was where I got it from? SORRY DAD). I did however feel naughty for watching a 15 film and felt that, yes, 15 was the “right” classifaction for such risqué stuff on the list above.

Anyway, fast forward about twenty years (ahem) and I watched it again, expecting to feel the same way I did aged 8 or 9 in that “15” was the RIGHT classification.

These days, BEETLEJUICE wouldn’t be a “15” – it would be a 12A. Hell, as long as it got rid of the  crotch-grabbing and depictions of suicide/murder (I’d bet no film would have as much smoking in nowadays, regardless of classification), it could be a 12, no “A” even. Why?

·      Swearing is no big deal when done for comedic effect (compare “Nice Fucking Model!” to Bruce Almighty’s (12A) “Over to you… FUCKERS!”)

·      Lydia might have to marry Beetlejuice but Geena Davis saves her from that fate and no sex is involved or even hinted at, Beetlejuice doesn’t even try and kiss Lydia or feel her up

·      Whilst the statues and corpses and monsters are indeed creepy/scary, they’re no creepier or scarier than anything The Moff has served up to kids in the recent DR WHO

·      Whilst there is a brothel in the model town with working girls blowing kisses to Beetlejuice, again there is nothing explicit here and could be kept in as a Simpsons-style joke only the adults would get: “Adam! Why did you build that?”/”I DIDN’T”

In 1988, BEETLEJUICE was a distinctly adult film. Yet by 2012, its tone had CHANGED. One of the reasons arguably could be this: 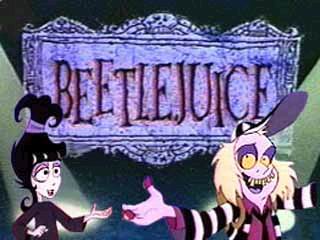 That’s right, kids today knew Beetlejuice first as a CARTOON, not a 15+ film. Except I’ve never watched the Beetlejuice cartoon, yet I feel the same  – its tone had changed, BEETLEJUICE should be a 12A maximum.

Let’s go back to the BBFC guy. It’s the audience that’s important … And if our expectations/beliefs of what’s “risqué” has CHANGED, ergo the tone of movies we previously found risqué has ALSO CHANGED. This is why we can watch ALIEN with one chestburst and call it an 18, yet by the time we get to ALIEN VERSUS PREDATOR, we need multiple chestbursts to feel even a hint of the same scariness… and yet call it a 15.

So this is why it’s so important to stay UP TO DATE with the notion of tone and what your audience finds risqué, horrifying, unacceptable, etc.

Another element to consider in terms of the tone of BEETLEJUICE is the relationship between its female characters Barbara (Geena Davis) and Lydia (Winona Ryder). Barbara is the mother figure Lydia craves and does not get in her *actual* stepmother Delia (Catherina O’ Hara). Lydia is a schoolgirl and rebels because she is otherwise not noticed by her larger-than-life stepmother and overly hen-pecked father: Barbara provides support and then love, summed up in her reticence to haunt the Deetzes out of her house “I just want to be with Lydia.” It’s also important to note it’s Barbara and NOT Adam who saves Lydia from Beetlejuice (and saves the day, in fact – it’s Barbara who is the hero).

So here is probably my most controversial point in suggesting BEETLEJUICE is now suitable for a much younger audience: Lydia is approximately fourteen years old, meaning there’s a strong chance young girls can identify with her (I know I did aged just eight or nine). Age is a great SHORT CUT in getting a similar-aged audience to identify with a character and thus a story (though not strictly necessary – check out the likes of DR WHO, THE SIMPSONS or indeed any cartoon you care to mention, as well as Superhero movies which all attract audiences of varied ages, proving age-of-character is greatly overrated on this point, tone goes way deeper. It’s worth remembering Lydia in BEETLEJUICE is the only child in a veritable SEA of adults in this movie).

Concluding then, BEETLEJUICE shows screenwriters how important tone is  in defining audience and that tone can change over the years for whatever reason, so we must strive to stay up to date in order to have our best chance of finding that audience for our films.