How To Write A Script Report 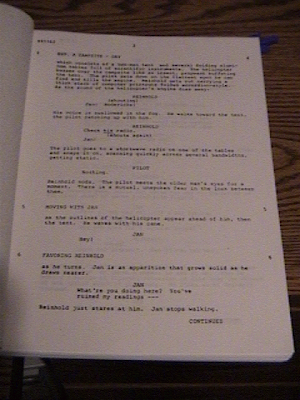 Click on the pic to check out my books

A couple of people asked me recently about “templates” for script reports.

In my experience, there is no definitive script report template. When working for script initiatives, screen agencies and some literary agents and production companies I have been supplied with *their* template, sure – but every single one has been quite different. Some are quite short and an “overview”; others are very detailed, with many different sections, some running as long as EIGHT pages when I’ve filled them in. Some look SOLELY at the story and craft of the screenplay; others look at things “beyond” like potentials for marketing, budget considerations and even Health and Safety issues.

Typically, rounding up what I’ve seen, a *typical* script report may *generally* look at the following:

STORY/PREMISE (structure may come under here too)

DIALOGUE (as it says on the tin)

ARENA (aka “storyworld”, not just location)

MISCELLANEOUS (anything else that warrants attention; most typically things like grammar, spelling, format, etc but also other things that don’t fit under the other headings I’ve already mentioned if appropriate, ie. writer’s voice.)

HOW an individual place actually reports on screenplays is another matter. Don’t panic – if you get chance to do a script report or intern for a company, they will give you their own report template and/or tell you what they want.

For those wanting to practice on their own, it may be of interest to know some universities and courses teach script reporting in one thousand words (Bournemouth did, when I was there). Basically the student will be asked to do a 500 words synopsis of the story as it plays out (“a blow by blow account”), then follow it by a 500 word critique of what is/what isn’t working. The student could do this for a screenplay or a produced movie.

I think this is a very useful exercise for any writer to take on, even if they don’t want to *be* a script reader as it gives them a really good perspective of how a story might play out and how it may be critiqued.

Why not download a screenplay from the internet, then attempt a report of your own under the headings above, for practice?

5 thoughts on “How To Write A Script Report”