Guest Post: The Importance Of Collaborating & Networking by Scott Baker

Here’s a great story from Scott about how you MAKE your own opportunities by getting “out there” and never giving up – enjoy! 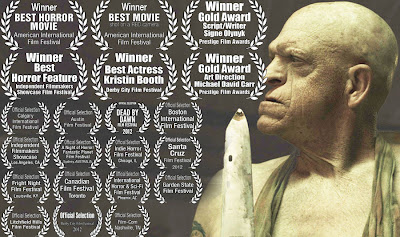 It was about August/September time last year where I logged into Talent Circle and found a job advert for a Scriptwriter, I thought to myself: “Am I good enough to apply for it?”

I still classified myself as a “novice” as I’ve been writing for just over a year now and in that time I was really struggling to discover my “VOICE” – what made me unique in my style of writing and storytelling. If you were to know me, (none of you do, I know) I’m a really shy person and would definitely lack the confidence to apply for anything like this opportunity over on Talent Circle. And then I thought to myself “What have I got to lose?” and the answer to that was NOTHING. Besides, we all got to start from somewhere.

So I applied and the surprising thing was that they liked me! I couldn’t believe it. I’m not someone who is familiar with collaboration but this was the first major step-up in my writing career since leaving college. This was also going to be my first attempt at a Feature film as well so that was really exciting. I was not writing an entire feature by myself (I struggled writing a TV Pilot and that was well documented with 50+ unfinished drafts of ONE episode) as there were two other writers with me. The three of us got on like a house on fire and we were right to schedule.

OK – even though this doesn’t have a happy ending as the plug was pulled and the film never progressed from there but what had I gained from this first experience?

Well, firstly, I have got to known and work with two brilliant like-minded people: Noel Rainford and Elinor Perry-Smith (@BrideofChrist.) We’ve just shot a short film entitled FOREVERTOGETHER in which we plan to enter it into the Sundance London Short Film Festival. We’re also planning our next project in which the script is completed, which we plan to develop further into a mini web series. I CANNOT wait to see the outcome of both of these projects and I sincerely hope that I never have a fall-out with either one of these two. I owe them a lot.

Then only last week I did something even more out of character. Over on Twitter, Jeanne Veillette Bowerman tweeted that the makers of BELOW ZERO, a new horror feature starring EDWARD FURLONG (T2: Judgement Day) and MICHEAL BERRYMAN (The Hills Have Eyes) were in need of an INTERN to help promote their film and their new film, BREAKDOWN LANE that will star KRISTIN BOOTH.
I WOULD HAVE NEVER APPLIED FOR THIS but now, I am so glad that I did as the guys are A-MAZ-ING! Signe Olynyk and Bob Schultz the masterminds behind BELOW ZERO as well as The Great American Pitchfest. I can’t wait to see them when they come to the UK as BELOW ZERO will be screening at the DEAD BY DAWN FESTIVAL up in Edinburgh on the 31st March.

The film is doing outstandingly well as it has been awarded with BEST HORROR FILM from the American International Film Festival and BEST HORROR FEATURE FILM from the Independent Filmmakers Showcase Film Festival along with many others. You can find all the details about where BELOW ZERO will be screening and to view the trailer over on its website and why not show your support and follow its official Twitter Page? (I run that page so I beg you, check the trailer out at least.)

I couldn’t possibly imagine that I would have met so many great people, both here in the UK and over in the US at such an early stage at my “career.” I’m a twenty-year-old lad from London who came out of college and into work, who aspires to be a scriptwriter. I was trying to do too much all by myself.

MYSELF is the key word here.

My point that I’m trying to make here is that COLLABORATION and BUILDING YOUR CONTACTS/NETWORK in these times can really help, regardless of the amount of experience you may have. In a space of six months or so, the amount of people that I’ve got to known/got to work with/swapped scripts with for peer-reviewing is unbelievable. To even reach out to filmmakers over in the States is what I class to be a great achievement as ultimately, that’s where I want to go.

I’m a strong believer that we all should set a goal for ourselves in which seems impossible when you set it. NOTHING IS IMPOSSIBLE and there are ways of getting around closed doors when they are slammed constantly in your face. In this industry, we CANNOT CATEGORICALLY DO THIS BY OURSELVES.
————————-
ABOUT SCOTT: Scott wrote his first ever script as apart of his A-Level coursework and hasn’t stopped since. He’s currently working on three high concept TV series: “Life & Death” which is the love child of THE WALKING DEAD and SUPERNATURAL; “Memory” which focuses on Dementia in Children, Teenagers and Young Adults and “B.I.O” set in a futuristic Ethopia. Find Scott on Twitter here and watch FOREVERTOGETHER here.