What’s In A Name? Some Thoughts On Formatting Characters’ Names 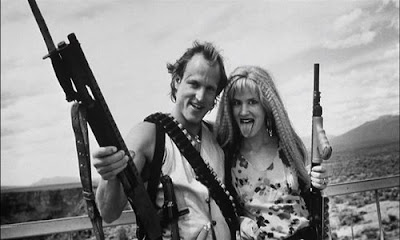 Many thanks to Bang2writer Ross Holland, who has this quick query:

I’m currently writing a script which has a character ‘masquerading’ as someone else. How do I show that in the script once the reader sees this in the text?

As with most “advanced” and particular format queries in screenwriting, there is no “set” way – and like most things to do with format, we’re talking CLARITY – ie. making it as easy as possible for the “flow” of the read.

Here’s how I’ve seen it done:

1) Starting with the Character’s fake name – for example, JOHN – and then adding the “real” name after the reveal s/he is not who s/he says s/he is, ie. JOHN/JAMES. You should stick with JOHN/JAMES from that point onwards I think, it just makes it easier for everyone. This is easiest when the fake name is JUST THAT – the name itself, rather than someone pretending to be someone ELSE (see next).

2) If your character is pretending to be ANOTHER character that’s actually in the script (or is a different version of *that* character), this is when it gets a little more complicated. On this basis, I think the easiest way to do this is by making it clear which is “real” one, ie. for example your character JULIE realises someone is pretending to BE her, you might want to call the “other Julie” FAKE JULIE. In an early draft of NATURAL BORN KILLERS, there are two characters “playing” Mickey and Mallory in a movie version of their lives and they are referred to as MOVIE MICKEY and MOVIE MALLORY. I have also read scripts when protagonists realise there are clones of themselves – ie. “KEVIN regards CLONE KEVIN in confusion”.

There are of course other ways of representing this element – these are just the simplist IMHO. Whatever you end up doing though, just remember the reader needs to keep an “anchor” on who-is-who. This leads me on to a further point, raised by a couple of scriptwriting students I was speaking to last week. Basically this point came up in conversation:

Don’t choose names for different characters that are too similar.

I can’t stress this enough. As an example, I had a script once with two leads: ROSE and RORY. To me it looked fine but everytime anyone read it, they always got Rory’s name wrong. Constantly. It was a real issue for notes in particular and actually screwed up Rory’s arc! I couldn’t believe it. At first I tried to fix Rory himself… Still, problem after problem. Then I changed Rory’s name to JAKE. Suddenly, magically, my readers’ problems with Rory melted away! It was basic semantic noise. Also:

Watch out for your own issues with characters’ names.

As careful as we can be, sometimes *we* get our OWN characters’ names wrong! The most common I see:

ii) Different characters having the SAME name (sometimes we fall so in love in with a particular name, we give it to a main character AND a peripheral by accident)

iii) Choosing outlandish names (usually a character has an outlandish name for a STORY reason… If yours doesn’t, ask yourself whether you truly “need” it… The same goes for names that “mean” something – is it subtle and clever? Or affected and weird? Or worse: is it a name readers see ALL THE TIME, like Edmund for the “treacherous son”, like in KING LEAR?)

What’s in a name… A LOT. It’s how your reader will relate to your character – SO CHOOSE WISELY!

Got a format query like Ross? Check out The Format One Stop, a run down of the most common format errors I have seen reading literally hundreds of screenplays.