What Is The Difference Between an NDA and a Release Form? 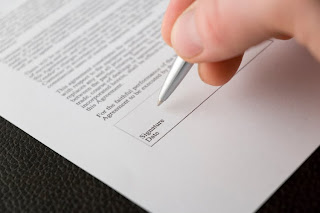 A couple of Bang2writers messaged me yesterday via email and FB chat, asking about the difference between an NDA and a release form. I thought it might be of use to repeat it here for anyone else who might be wondering.

What is an NDA?

NDAs usually last between one and three years. Projects with an NDA are usually “packaged”. This usually means the project has a cast attached and a budget drawn up. Maybe they’ve even started production or are in post production. Since SO MUCH MONEY can be involved in filmmaking, NDAs can be a good idea.

That said, even packaged movies sometimes will not ask me to sign NDAs either. It’s just not good manners for me to talk about someone else’s project, never mind leak details and B2W never would, anyway.

What is a release form?

A release form is a “permission to read” document. Again, it is something a PRODUCTION COMPANY may ask a writer to sign before they will consider reading his/her script.

Usually the release form will ask the writer to not hold the company liable for any SIMILAR projects they may develop that’s NOT the writer’s script in question, after it has been read by said company – or, in other words:

A lot of new writers believe release forms are so ruthless production companies can RIP WRITERS OFF with abandon. This is not the case. The production company is instead merely protecting itself from lawsuits from those new writers who believe all prodcos are out to rip off writers. But why would they do this?

Remember, there are mega popular ideas and similar specs doing the rounds all the time. There is a stronger than average chance a writer *will* see a similar idea to theirs go into production! They may  then go off on one legally about it. Better to sidestep the problem before it becomes an issue … Hence release forms.

As a writer, should I send an NDA with my spec?

Absolutely not. For one thing, there’s a strong chance people will not read your script as a result! Sending NDAs out is considered paranoid and frankly, unprofessional.

As a general rule, Bang2write does NOT read specs with NDAs attached from individuals. This is because I believe it contributes to this bogus culture of paranoia regarding copyright.

Some writers have then said, “Well I’m not sending my script to get read by you”. However, I can’t even remember when this last happened, so I think avoiding NDAs works. I’d wager many more writers are realistic about this issue NOW than say, five years ago.

If you want to be read in America, you will HAVE to sign release forms (they don’t seem as big a deal over here). Google some templates and check them out. The more release forms you see, the more you’ll realise they’re much the same: the language, what they set out, their intention.

If a release form looks considerably different to others you’ve seen, that should set alarm bells ringing. If you’ve never seen one before and aren’t sure what to expect? Simply ask someone who’s dealt with them before!

There are LOTS of online resources on Facebook and via #writingcommunity on insta and Twitter that can help you. If you want to ask me or any of the Bang2writers a question, join us on Facebook HERE.

3 thoughts on “What Is The Difference Between an NDA and a Release Form?”

previousCan I Write A Sequel Of My Spec – Even If The Original Script Has Not Been Produced?
nextThoughts On The London Doc Summit (Dec 3-4 2011, Regent’s College) by Kristen Vermilyea