I was GUTTED to be unable to attend Team LSF’s latest offering at Regent’s College last weekend – the brilliant-sounding Doc Summit, all about documentary. Luckily for all us Bang2writers, the marvellous Kristen Vermilyea has stepped into the breach to write it up for us. Thanks Kristen! And enjoy… 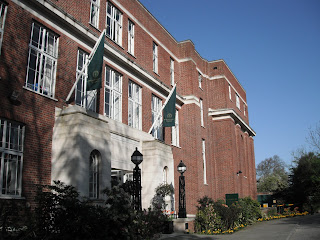 As I sat in my seat watching the room fill up and waiting for the first ever London Documentary Summit to begin, I decided I should visit the loo. Feeling ever so trusting of my new friends, I left my jacket and bag at my seat and ventured down the hall to find the ladies. No sooner had I pushed the door open did I hear, “All full” from a voice behind the door. As I turned back to wait in the hall, another woman came behind me and was about to open the door. I passed on the ‘all full’ message and we both stood there, but only for a moment as a very helpful and smiling face told us of a secret rest room down the hall, past the security desk, and down the stairs. We both thanked the woman with the inside scoop and headed downstairs.

It’s funny, because we’ve all been there – two strangers headed from and to the same place but not exchanging a word. For a brief second I thought to myself, ‘you really should say hello. She’s obviously here for the same reason you are and it never hurts to say hello…’ But I couldn’t be bothered and though we smiled and held doors for one another, we didn’t exchange any words.

Back in the stuffy little room, and after our hosts, Chris Jones and and Andrew Zinnes welcomed us, guess who was introduced as the first speaker? Yup. The woman from the loo. Her name is Jo Lapping and she is with BBC Storyville.

Over the course of the two day summit, Jo, along with 11 other speakers, spoke candidly about everything from what networks and producers are looking for, to how to find a distributor, write a solid treatment, increase your online presence, navigate your way through post production, how to pitch your idea, the difference between 24p and 25p, festivals to check out and how you might actually get paid for your film! (I could give you the answers, but that wouldn’t be fair, now would it? Come to next year’s event and find out for yourself!)

Here are a few things I came away with:

As a documentary filmmaker, you need to focus on narrative; this point was driven home by just about every speaker over the course of the weekend. Not only does one need to constantly ask oneself what the story really is, as filmmaker Geoffrey Smith brought up, one needs to realize that the film’s story is not the same as the film’s narrative. What is the underlying story? For example, his film, The English Surgeon is about an English Doctor traveling to Ukraine to do an operation, but the real story is about, in Smith’s own words, “one man’s struggle to do good things”.

While this may seem logical and second nature, it seems that it really may not be for some of us. So many films are just following the life of someone or an event or a specific history, but unless there is the thread of a narrative, just like in fiction films, the story falls flat and fails to deliver.

Chris Atkins, director of Taking Liberties explained by using examples from his films, the legal concept of Fair Use (Fair Dealing in the UK), something that perhaps not everyone will encounter in their filmmaking, but a very important tool nonetheless.

He emphasized the need for a good lawyer and that one that is expensive is not a bad thing, if they really know their stuff. If you hire a cheaper lawyer who is less experienced, it will take them more hours to get to the same place and in the end, end up costing you more money. (Duh.) He was so adamant about this fact that several audience members asked for the name of the law firm with whom he works. (Again, I would share, but this time my reason being that I cannot read my own handwriting – but the first name does look to be Simon or Simons, for what it’s worth.)

I also gleaned lots of helpful little nuggets from Chris Jones’ two presentations on post production and social media for filmmakers, and was quite pleased with myself for already being engaged in many of the platforms which he mentioned (though not as active as I need to be, so pat on the back withheld).

He asked this room of almost one hundred people how many people were on Twitter and only a smattering raised their hands. He then went on to ask how many were tweeting from the summit and there were only 6. (this time I did manage to pat myself on the back, but admittedly, it had been quite some time since I had tweeted and it was likely to complain about motherhood to the price of chicken at the grocery in Zurich.)

Tim Spark of distributor Mercury Media, went on at length about the distribution process which I found enlightening and frankly worth the price of admission. As distribution can often prove to be the most difficult part of making a film and so many of us don’t have a clue how it works, I found the info that Tim provided trés helpful.

In addition to the traditional distribution model, we heard about Distrify, a revolutionary way to monetize your film. I was so jazzed about this that I called my producing partner (from a film we shot seven years ago that we got distribution for in the states) and asked her to look up how long the contract was for. We never saw a dime and this would be a great way to reinvigorate the film and maybe even give the investors (my parents) back some of the money the invested in the film! (I’m not holding my breath, of course, but as they are never expecting a dime in return, wouldn’t it be great to give them a check for even 50 bucks?!)

The only disappointing thing about the weekend was that there was no official networking event, though I was told that they (Chris and Alex) repeatedly tried to have one and their plans were dashed for one reason or another. They did emphasize that we needed to introduce ourselves to one another and network (like grownups do, I’m told), but it was still difficult, as people tend to stay in their groups and without a drink in hand, it can be difficult (so I’m told).

I did force myself to sit with a group (of handsome men – can you blame me?) at lunch the first day and it turns out that one of them went to college in the states with my high school boyfriend and another may just be helping my produce my doc. And on top of that, due to our quick and fast bond, I was invited to drinks and dinner with the group and didn’t have to be all alone in a foreign city – lucky me!

You never know with whom you’ll be headed to the loo so always at least hold the door. Even when there is no official networking event, do try to say hello. Even if you consider yourself shy. Create and maintain a presence on the web on everything from Facebook to Twitter to About.me and more. Write, write, write. Go out and make films you are passionate about. As is true with anything in life, your passion and enthusiasm for things is contagious and this is how things catch fire and move forward. Connect. Stay connected. Don’t be afraid to ask for help and partnership.

Was it worth flying over from Zurich? Indeed. I look forward to continuing and creating more relationships in hopes of working in London and here in Switzerland. And if you’re looking for a great place to shoot … come on over – we have Alps!
———————————————-
Kristen Vermilyea is an actor, writer, producer, blogger, voice-over artist, film festival consultant and ‘go-er’, excessive ruminator and reluctant hausfrau. She lives in Zurich, Switzerland and you can see her website here. Follow her on Twitter here.

previousWhat Is The Difference Between an NDA and a Release Form?
nextWant Some Blog Posts This Week?