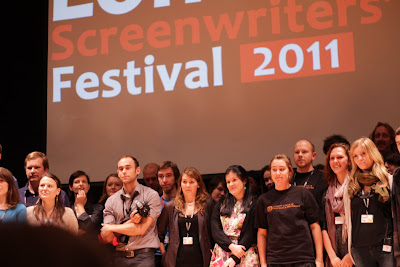 London Screenwriters Festival 2011 was a.maz.ing! It’s been a tough year – as Chris said in the keynote speech, most businesses fail in their second year of trading – but we not only hung on and pushed forward, we did EVEN BETTER than last year!

So much so in fact, I think I raced through the festival in a blur! If you saw me and I rushed straight past you or stopped for about five seconds – my apologies. I was hoping to catch up/meet more people than I did, but in helping arrange the LSF Advanced Mentor Programme for a lucky 18 writers; listening to speed pitches in my capacity as a script editor; running three panels AND interviewing TV ledge showrunner Ashley Pharoah, I somehow raced through the whole three days at the speed of light. Suddenly it was Monday – and I felt like I’d been hit over the head with a sledgehammer!

Super kudos to the team for making it such a great event – the volunteers were characteristically fantastic and the speakers were so generous with their time. I think Finding Nemo writer David Reynolds tried to meet every single delegate at the fest! He was brilliant, hanging out in the bar (though he didn’t appear to like the Tiger beer I bought him! Hint for you there if you’re in a position to buy him one yourself). Ashley Pharoah too was brilliantly generous and really seemed to care about inspiring us all: after our “In Conversation” session, he went up to the scriptchat for ages. Similarly my panelists offered up fabulous insights, whether it was Damon Rochefort on his obvious love of what he does at Corrie; TV Exec Kathleen Hutchinson on how Holby and ER used to swap body parts; Sophie Meyer from Ealing Studios & Ed Clarke on how good writing is obvious from the first page; or Athos Kyrus and Sarah Olley on how readers ARE committed to reading your script, but the writer has to fulfill their end of the bargain too – ie. don’t be boring & don’t go for formulas or quick fixes.

Many thanks to everyone who made the LSF possible this year and I look forward to doing it all again next year – in the meantime, I’ll leave you with a photo of Ashley Pharoah & I looking rather shocked for some reason, let’s hear your captions in the comments section… GO! 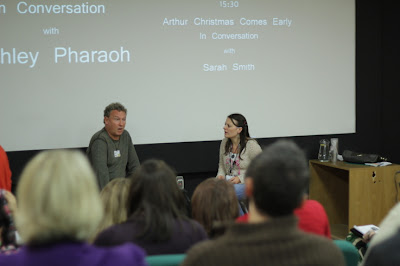