EveryWoman: Where Is She?

I was at The Underwire Festival this weekend just past, celebrating women in film, behind AND in front of the camera, though my session was called “A Room of Her Own: Writing Leading Ladies”. Here I am, with Underwire host Gemma Mitchell, fellow writer and director Ben Blaine & StarNow casting agent and actress, Jessica Manins… Hope to see you there next year! 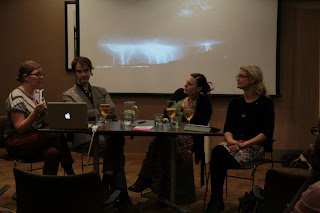 I had thought I had heard every possible argument FOR including more female POVs in terms of characterisation, but an interesting insight came up during the session which even I had not considered in-depth before:

“Why is there only “room” for “extraordinary” women?”

This came from one of Underwire’s founders, the fabulous (not to mention extraordinary) Gabriella Apicella, whom you can follow on Twitter here.

Let’s rewind a minute, before I address Gabriella’s query. If we look to leading men in film, the stamp “hero” is very much in evidence. These guys are fighters in a both literal AND metaphorical way, going for truth, justice or survival and dragging us all with them in their wake. They can be ACTIVE, INTERESTING and most of all VARIED… It doesn’t matter what your “version” of a hero is, whether that’s a guy, walking away from an explosion in a tattered vest or an understated, quiet lawyer or something in-between: film’s got you covered, baby.

What’s more, male protagonists even cover the ANTI-HERO – that guy who’s not even remotely like the TRADITIONAL HERO type, someone who may even be a VILE HUMAN BEING, yet still an audience may get on board with him *for some reason* and NOT always for the “classic” reasons… ie. “vile human being learns to become decent human being”.

In other words, male leads in film can be pretty much ANYTHING. And why not?

Yet despite this, female leads in film are not permitted the same scope to be as VARIED – instead they kick ass, are cold bitches or are victims. So when there IS an interesting, flawed woman, all the females in the audience are so busy saying “Oh! Thank God for that, for once I haven’t had my brain sucked out by this representation of a woman” they forget to ask ANOTHER burning question:

Think about it. A male lead in a film might be his own man, but so are his buddies, henchmen and nemesis too. There is a veritable SEA of men in your average feature film.

Yet if we have an interesting, flawed FEMALE LEAD? Typically – it’s JUST HER, either literally or metaphorically as she FORCES her head above the crowd.

The knee jerk reaction to Gabriella’s query is obvious, then: ALL characters, regardless of gender, race or whatever should be extraordinary. Shouldn’t they…?

Yes. And no. And the reason is just as obvious:

Just like film has got the male HERO and ANTI-HERO character sewn up, The EveryMan Character is just as valid as a character arc. The Everyman is conceived as an ordinary character with whom the audience is supposed to be able to identify easily because it COULD BE THEM, only in extraordinary circumstances – immediately making a mockery of the notion that ALL characters MUST be extraordinary. Because they don’t!

Think of David Mann in Spielberg’s debut feature, DUEL. For me, David is the epitome of the EveryMan character – check out his surname!! He’s a normal bloke, wanting to get home. We know relatively little about him other than that. It’s been a while since I’ve seen the movie, but I recall a brief reference to the fact he has a family and he works in an office. End of the day, the movie is about how he, as a “normal bloke” deals with that seriously ABNORMAL trucker and the attempts made on his life.

On this basis then, where is EveryWoman?

DUEL is a great example of a strong genre movie that still delivers, despite not having an “extraordinary” character in the lead. Yet even in drama, it’s not often we see EveryWoman, even if the female characterisation is GOOD. Instead, those women are LARGER THAN LIFE, no matter what.

It shouldn’t be hard to conceive of an “ordinary” woman and put her in “extraordinary” circumstances, yet we see her with disturbingly far less frequency than EveryMan. Instead, if we ever see female leads (and they’re not falling into stereotypical territory), then they are nearly always EXTRAORDINARY in some way, with “special skills” of some kind that set her apart. Though this *can* be a good start, is she automatically needed? Maybe an EveryWoman character in her place could give your script the edge in terms of getting an audience on board.

Perhaps Execs fear they are “talking down” to the female section of the audience by suggesting there is such a thing as an “EveryWoman”? Yet I am one. I tick various boxes on the “normal woman” scale: Married – check. Kids – check. Working – check. I do the school run, the shopping and the washing. I see nothing to be ashamed of, just because I am not kicking ass with my martial arts skillz, seducing superheroes or leading bank heists on a regular basis.

So next time you sit down to dream up a female protagonist, don’t ignore the existence of EveryWoman. She could be just what your script and story needs, to make your audience relate to your journey.

2 thoughts on “EveryWoman: Where Is She?”

previousUSP, PT 2: You, The Writer
nextHow To Write Great Characters