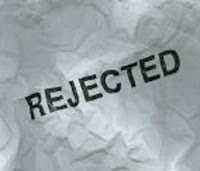 Since I rejected 170+ people yesterday for The 4 Nights in August competition, I thought those non-longlisted entrants would like to know whether rejectors ever feel guilt.

Yes, this one does.

I’ve rejected A LOT of people over the years. I joke sometimes that’s why I never get very far in contests myself: it’s scriptwriting karma, if you will. Way I figure it, if you write “Pass” enough times on coverage and add up enough low scores or percentages, it’s bound to bite you in the ass in an industry that does, in part, rely on luck.

And I’m very conscious these are people’s DREAMS I’m essentially treading on, whether I like it or not. As a writer myself, I’ve been rejected more times than I care to count. I know it stings. Hurts, even. I have received rejections that have had me sobbing inconsolably. Really. And not because the person who’s rejected me has been vitriolic either, but because I happened to want that opportunity SO MUCH and to have it taken away, when I’ve worked so hard, seems unbearable.

I totally get it.

So every time I work on a contest or an initiative, I always try and let EVERYONE know, successful or not (email failure notice allowing, there’s always some!). Though some people have told me over the years they couldn’t care less whether they were “close” or not – or that sometimes it’s WORSE to know – the resounding majority of writers are happy to at least hear the outcome, even if they jokingly call it a FFOF or a FO@5.

But it’s HARDER now. It really is.

For one thing, most scripts LOOK like scripts, since most are industry standard format. Secondly, far LESS scripts make no sense whatsoever. Thirdly, generally characters – whilst admittedly still sometimes non-empathetic or familiar – usually appear to know what they are doing and why, at least for *most* of the script.

Now, sorting contests is HARD. Readers have to make some really tough choices in who should go through. Sometimes there is quite literally a hair’s breadth between who DOES go through and who DOESN’T. It’s as simple as that. I’ve even seen names AND SCRIPTS I recognise do BRILLIANTLY in one contest and yet not even place in another – and this happens all the time. It’s even happened to MY scripts.

So next time you get rejected, don’t obsess over not winning or placing. It really is the taking part that counts. Honest!

Resources and articles on character & structure

2 thoughts on “Coping With Rejection”