You know TV programmes used for whimsical padding? Those you watch without scheduling, and when you’re exhausted; like Deal or No Deal or Family Guy, the TV equivalents of toast and jam? Those type of programmes take up a significant portion of my life (oh what a busy girl), so I was one of the loudest mourners as repeats of Friends ended last week. I was hammering tearfully on its already well-pummelled gravestone.

Friends has to be the ultimate whimsical padding. For most it doesn’t result in any great frenzy of emotion; it doesn’t abuse the tear ducts or evacuate the stomach. It earns titters from some, and eye rolls from others. And because the episodes were repeated on E4 and Channel 4 in endless loops of stupid New York skylines and twanging incidental music, it could pop into your day and night at any time. At different points in my life over the last few years I’ve watched it with dinner at 7PM, then again at 7AM after struggling home and trying to stay awake in the hour before lectures began. Those six creamy New Yorkers followed me wherever I went. 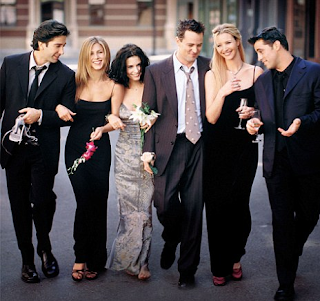 As I write this I’m watching Seinfeld. Season 7, episode 9. Titled The Sponge. In which Elaine stockpiles her favourite birth control product when the pharmacist stops selling them. Given her finite supply, she has to decide whether or not her boyfriend is “Spongeworthy”.

I can’t find Seinfeld on TV but I found it online, and it’s the perfect Friends replacement. In fact, compare the first season with the first season of Friends and you’ll find out where Friends got its ideas from. Seinfeld is very funny and very easy to watch, though it can be difficult to use as background fodder given that the show often provides us with excruciating scenarios and we want to find out who ends up on top. It’s especially fun if you watch it in the knowledge that George is based on co-creator Larry David, of Curb Your Enthusiasm fame. Seinfeld is scripted and Curb Your Enthusiasm unscripted, but it’s amazing how the quality of ridiculous social observations don’t differ much between the two.

British audiences seem to love social observations (just look at our stand-up comedians in contrast to the “yo momma” norms of Stateside comedy gigs), but somehow Seinfeld just wasn’t as big a hit over here as Friends was. Yes Seinfeld appeals less to kids, but most adults prefer Chandler to Jerry any day. You’d expect British audiences to lap up Seinfeld‘s liberal anti-prude agenda and long-lasting decision to have no sentiment or messages at the end of episodes.

So E4 should show repeats of Seinfeld instead, then. But it won’t. So if you find yourself with 22 minutes to put your feet up on the coffee table, and you’re confronted with Friends‘ sudden lack of omnipresence, don’t despair! Put on Seinfeld instead. It’s funnier, cleverer, and, unlike Friends, it’s not a guilty pleasure – it’s just a pleasure. 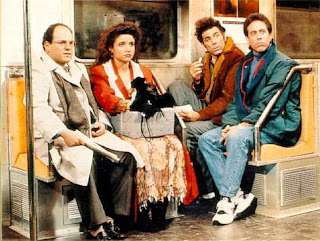 —————
Eleanor just finished the MA Scriptwriting degree at Goldsmith’s, specialising in comedy drama. Join her on Facebook here and read her own blog, here.

2 thoughts on “Sitcom: Friends Vs Seinfeld by Eleanor Ball”