The End Is Just The Beginning: Adventures In Self Publishing by EJ Mack 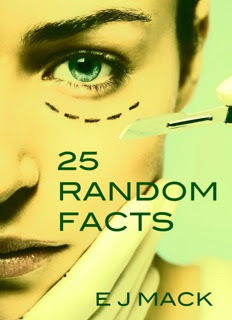 “Why?” Surely the most common question of them all. We ask it constantly as a child and continue to do so right throughout our adult life. As humans we are constantly asking why things are as they are and why people do what they do. But little did I know that I’d be asked this question myself time and time again when people discovered I’d made the choice to self-publish.

I’m not sure it was a conscious decision as such, more one of those organic, grows-on-its-own, kind of things. One minute I was happily taking my first baby steps as a screenwriter, the next I’d dug up an old, unpublished novel called ’25 Random Facts’ and thought, “I know, I’ll blog it and see if people actually think I can write.” It was a no-brainer; the thing was already written so demanded no effort from me. I could carry on with my screenplays whilst also finally finding out whether or not I was barking up the right tree when it came to my new career post babies. I’d been writing since I was 20 but always lacked enough self-belief to do anything with it; pursuing agents and publishers was simply too daunting for me. Yet finally, here I was, brave enough to put myself out there and see what came of it. For once I was serious about something.

There were two things I didn’t expect however:

1. That pride would force me to re-edit and in some cases re-write each chapter before I released it onto the blog, one chapter a week.

2. That people would actually like it and tell me so. Some of them even got frustrated when I was a day or two late posting the next chapter.

And that’s all it took to plant the seed. Oh, and I guess the fact that the media was full of stories of self-published authors making a tonne of money on Amazon might have had some small bearing on it…
Getting it published online took a little patience – it is actually a very simple process once you understand the formatting issues but these can be enough to send you to an early grave. To date I have now published to Amazon (Kindle), Smashwords (all readers) and Lulu and each time I’ve had to reformat my files and scan them religiously for formatting issues (and there are ALWAYS some hiding in there somewhere). Then of course I had to find a cover image. At this stage I was not aware that you could purchase licenses for images online so I merely doctored a personal photograph. I was just desperate to get it out there and selling as fast as possible.

So finally it was up, out there in the marketplace, ready to be snapped up by all those discerning readers. Except no one was snapping. No one even knew it existed and I was fighting for attention alongside hundreds of thousands of other authors. Suddenly I realised the true benefits of having an agent and publisher on side. Marketing and publicising the book has got to be the hardest, most soul-destroying part of all. The writing was a breeze in comparison to the brick walls I’ve come up against. I’ve sent it out to online reviewers, those that I could find, with successful results – the reviews have been fantastic – however I still need to rustle up even more if my book is to have that ‘must read’ air about it. I’ve tweeted (what feels like endlessly) about it, I’ve driven everyone mad on facebook about it. I have a Facebook ‘page’ and have joined Goodreads. I’ve even blogged about it whenever I can find the time and have something to report.

But even after all that I began to feel like I was stalling and so decided in the end that what I needed was paperbacks. Once again I went through the formatting process and had promo copies printed. Then I trawled through every publication I could think of that might review it only to discover the same adage – they will not review self-published books. And contrary to popular belief, I don’t believe it’s anything to do with snobbery about us ‘Indie Authors’ (sounds so much nicer than ‘self-published’ don’t you think?). Now that I know just how many of us there are out there, I quite appreciate that reviewers need some kind of quality filter to avoid being absolutely inundated with books that they would never find the time to read.

From my experience, what it all amounts to is that the act of self-publishing does not signify the end. Rather it is the beginning of a whole new chapter of roller-coaster highs and lows. The fantastic reviews, the sudden, unexpected sales followed by days, sometimes weeks of nothing. My time now is filled with scouring the web for promotional ideas, playing around with cover art and rewriting blurb to see if it sparks further interest. But most of all I’m back to writing the next book as the more and more I read, the more I understand that in self-publishing, to sell your book the first thing you need to do is write another.
———————-
BIO: An author and screenwriter from South West London, E J Mack recently self-published her first novel, ’25 Random Facts’, online and in paperback. She is now busy working on a follow up for release by the end of the year whilst also putting the finishing touches to two screenplays. Find her on Twitter here and read her own blog, here. Finally – Buy 25 Random Facts: what you waiting for!