Write What You Know? Then Write About Being A Writer! : P by Eleanor Ball

If you were at the Goldsmiths MA Scriptwriting Showcase last Thursday, thank you for attending! It was wonderful to see so many people there. The showcase was a great success, and we’re especially proud of it because we’re the first year to do it and we organised the lot on our own, from the casting to the gaffer tape. If you have any queries about the writers, actors or scripts, please hit me up here or on Facebook.

Anyway, enough about my class’s brilliant initiative that makes you want to hire us instantly (which it does). There were lots of writers at the showcase exchanging tales and tips, which reminds me of the most common writing tip on the face of the planet.

Write what you know. A piece of advice given to every new writer, every old writer, and every writer who needs to get back on track having just penned a screenplay about narcoleptic racist hobgoblins from space.

Of course what’s meant by that piece of advice is not just physical stuff. You don’t have to just write about your job or hometown or family; but your opinions and emotions and values too. Write what you know. The problem with that is that every writer has one thing that every single one of us — without exception — knows, and should, according to the advice, therefore write about. And that’s… BEING A WRITER. 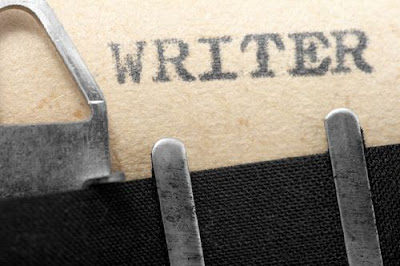 As a result, sometimes it seems like every second protagonist out there is a writer of some sort, a journalist or a blogger or a novelist or a scriptwriter. They’re usually quite warm, modest, wry characters (Dan in Real Life, Extras, Sex and the City, Invention of Lying), or greatly romanticised by their humble art (Moulin Rouge!, Little Women, Murder, She Wrote), or dramatised by their isolation (The Shining) or ego (Garth Marenghi’s Darkplace). And even then, when we’ve finished writing about ourselves, there’s still our heroes to write about, many of whom are — naturally — writers. So there’s Finding Neverland and Miss Potter and Wilde and Shakespeare in Love — and Marley and Me and Julie and Julia — and Carry on Writing (“is that a pen in your pocket or are you just pleased to see me?!” “No, it’s a laptop”).

I think there are plenty of characters that don’t HAVE to be writers. Like Jeff Daniels’s character in The Squid and the Whale, for instance. Or, more recently, Eddie in Limitless. If you haven’t seen it yet, Limitless is a fun swishy thriller which heavily relies on the annoying myth that we only use 20% of our brainbits. I enjoyed Limitless more than I thought I would, mainly because my expectations were lowered dramatically by everything I was ever told about it, but one thing I did frown at was the profession of the main character, Eddie.

To be honest, I think Eddie is just a writer because his name is Eddie. It’s a writer’s name. He has scraggly hair and lies on the sofa a lot. Eddie gets dumped by his girlfriend (oh, can only be a writer then), and can’t finish his book, but then he gets a magic bean and can finish his book because he gets super brainpower. Then we never see his profession as a writer again. He becomes a stock trader. 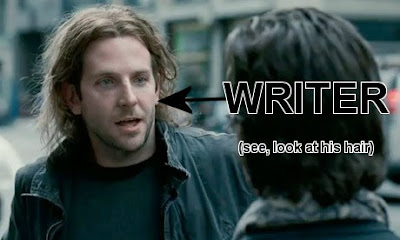 It would’ve been far more interesting if Eddie was, say, a nurse who becomes a House-esque diagnostic genius, a law clerk who trumps the lawyer, an advertiser who sells the world the crappest product imaginable; or how about a philosophy lecturer?

There’s a million jobs in which to be a loser-turned-superman. Not everyone HAS to be a writer.

2 thoughts on “Write What You Know? Then Write About Being A Writer! : P by Eleanor Ball”