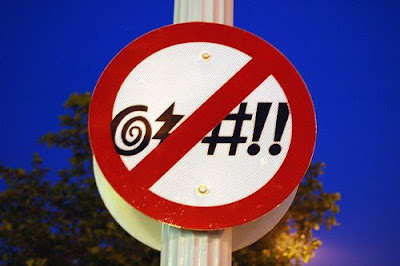 Beware! The below post is about swearing, so it contains a good deal of norty language.

Remember South Park: Bigger, Longer & Uncut? I was 12 years old when that came out so I could relate to the movie’s plot about a bunch of kids going to see a R-rated movie. But while I was watching it, my aunt was in the background. Ironing. Stony-faced as the song “Uncle Fucka” blared from the TV…

I cowered in embarrassment and couldn’t enjoy the movie. And sometimes, these days, I see people I’M watching a film with cower at swearwords! And it’s annoying! I cower at people cowering. Swearing is never meant to turn you off a film, but sometimes it just does. It can get in the way. It can be out-of-place and conspicuous. And swearing can be so over-used in a film that when it’s intended to finally be used for emphasis and drama, you can quite happily munch popcorn through the stream of expletives, so desensitised to the swearing that they might as well be saying “gosh darn it, you killed my father, you naughty little silly” for all the emphasis is worth.

So the lesson is don’t use loads and loads of swearwords. But… but…! What about the much-beloved Four Weddings and a Funeral “fuck, fuck, fuckity-fuck!” intro? Or one of the most acclaimed scenes in The Wire, which features substantial dialogue restricted completely to a single expletive:

Two very different scenes. Funny and sweet and engagingly farcical with the former, and witty and canny and cool with the latter. Both very audacious, effective, and enamouring. All because of the swearing.

And hopefully, no matter how clean-mouthed you are in the real world, neither of those examples make you cower. On the contrary, hopefully they make you think “this is fucking well-written”.

So, some swearing makes you bored and cower, and some swearing makes you curse in adoring enthusiasm. So it’s not about the audience, it’s about the writer. A good writer can turn prudes on. In which case, I think the answer to this is to introduce some kind of FASCIST SCHEME to the scriptwriting industry and DISALLOW some writers the ability to use swearwords. I know there are already stringent swearing rules in place, but they’re about taste and decency – and who cares about taste and decency? I’m talking about enjoyment here, and stopping people from cowering in embarrassment. So, fascist rules, independent of ratings and certificates and the watershed, based on the talent of the writer.

If you’re a pretentious little scriptwriting student looking to make your first TV series (like me!) you can have many bastards, some shits, and one fuck. If you’re a devilish up-and-comer on BBC3 or HBO, you can have two fucks and a cunt. And if you’re a writer of The Wire, Deadwood, or The Thick of It, and therefore use swearing as a measured and almost mathematical character device, then you can go fucking nuts.

Them’s the new “rules”.
—————
Eleanor is on the MA Scriptwriting degree at Goldsmith’s, specialising in comedy drama. Join her on Facebook here and read her own blog, here.

ON THIS BLOG BEFORE ABOUT SWEARING:

F*ck Off You C*nts: Swearing in Scripts

Audience: Who Is Your Script FOR?