Case Study: All About Symbolism in ALIEN (1979) 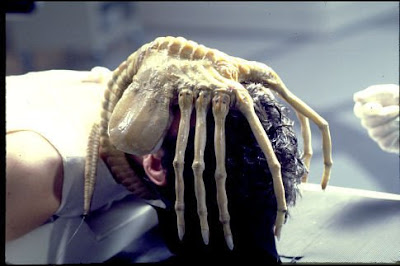 Many spec writers want to introduce symbolism in their scripts. And why not? Sometimes the best writing we see “hints” at other things; there are multiple ways of “reading” it — and us screenwriterly types can pat ourselves on the back for “seeing” it.

When it comes to symbolism of any kind, think LAYERS, like an onion. You can do this any way you want: visual metaphors, allusions, motifs, character traits. There are no rules, remember.

However, the biggest issue I see when it comes to symbolism:

It’s not clear what the screenwriter is actually doing.

Audiences do not sign up for the fancy stuff. They sign up for a good story, well told. They want ENTERTAINMENT VALUE, whatever that means to them and the genre or ‘type’ of story they’re interested in. THAT’S IT.

Let’s go back to that notion of an onion. It’s round, right? It looks like an onion. That top layer then *is* ENTERTAINMENT VALUE.

As for the second layer, well that’s story. The Longline version, if you will. We should know what the story IS – however you structure it, linear or non-linear.

So if you have a story about a big huge alien eating everyone’s ass – like we do in ALIEN – that’s what your script IS: its second layer, if you will.

Yes, the symbolism or whatever is hidden inside. That’s the point. However, too many specs are so into the symbolism, they forget about keeping the story (and thus the plot) simple.

EVERYBODY SHOULD BE ABLE TO GET YOUR STORY AT FACE VALUE: that top layer is plot, pure and simple: “in this story [this event or thing happens]”.

All about Symbolic Characters

But okay, okay – what about symbolic characters??  Very often scribes want to have these guys – representations of good and evil; God and the Devil; Adam and Eve; happiness and sadness; commerce and art; communism and capitalism and so on (and yes, I’ve seen all of these, many times). And why not?

But too frequently writers so in love with these representations and what they mean in the grand theme of their work, they forget to essentially write the characters as actual people and audience can relate to.

Kane in ALIEN as a symbolic character

So let’s look at ALIEN again. But let’s step aside from Ripley; she is NOT the catalyst for the events that happen in that first movie, it’s not actually her actions that kick everything off.

Instead, it’s John Hurt’s character, Kane. An English guy, very curious, loves himself a bit, thinks he’s better than the rest of his crewmates, so the same rules don’t apply to him. We even see him wake up first from hyper sleep (even though he’s not the protagonist).

That’s Kane on the surface… but Kane underneath? Check it out:

BECAUSE he thinks he’s better than the rest, because he thinks the same rules don’t apply to him, he disobeys orders – AND TAKES EVERYONE INTO THE PATH OF THE CREATURE!

But not only that: look at his name!! Kane = Cain. What does Cain stand for from the bible? DEATH – he is a murderer. Whilst Kane is not a murderer in ALIEN, he DOES bring death into the ship. Also, In the dictionary, to “raise Cain” is to “cause a commotion”.

Put simply: without Kane, there would be no movie cos they’d have never come into contact with the facehugger.

You don’t need to get Kane’s name is like “Cain” or anything else to appreciate what Kane *is* in this movie – which is the doom of everyone else. That second layer is just cool and good writing.

So in other words:

DON’T be too clever when it comes to symbolism. You need the “obvious” stuff first ANYONE can get FIRST … Then add the fancy stuff for others to get … like film students and screenwriters!