Screenwriting Tip: Audio Description For The Blind By Eleanor Ball

I’ve just discovered a brilliant new source of writerly inspiration. And if you’ve not already discovered it yourself, I recommend you plunge right in:

Audio description for the blind.

It happened the other day when I was checking out old episodes of The Apprentice (yep, I’m still livin’ large and workin’ hard). The recent series is the first I’ve ever seen, and I’d noticed no sign of Alan Sugar being anywhere near as abrasive as people warned me, so I thought maybe he was worse in previous series and wanted to sample this for myself. Anyway, it took me a few minutes of great confusion before I figured out that one of the episodes was narrated for the blind.

“We sweep high over the London skyline and the sun sets behind a glass building, the world reflected in its windows. In the boardroom, Sir Alan sits stony-faced. He taps his fingers, and glowers as the candidates enter”.

That would be at home in a script. In fact, that would make an ideal description in a script. It’s lucid, it’s provocative, and it’s succinct. It’s Hemingway!

“In the bed of the river there were pebbles and boulders, dry and white in the sun, and the water was clear and swiftly moving and blue in the channels. Troops went by the house and down the road and the dust they raised powdered the leaves of the trees”.

Adjectives are often so irresistible to a writer. I’ve always thought of them as dog treats. Every now and again the mysterious and tortuously fabricated God of Writing will chuck us an adjective, and we’ll eat it right up, and savour it, and probably slobber a lot. And if the God of Writing drops the bag of treats, we’ll gobble every single one of them up off the kitchen floor.

It’s taken me years and years to finally think of adjectives as treats rather than A HUMAN RIGHT. Instead of describing a character as “a cat-like Cuban” I’d describe him as a swarthy, sinuous, streamlined prowling panther with a loping elegance and a darting élan, and – WHAT DOES THAT EVEN MEAN.

Audio description for the blind is a spring of scriptwriting advice.

It’s for an audience who can’t see (or have trouble seeing) what’s on the screen, so narration has to be very clear. Simple and recognisable. Audio description has taught me that description should also be somewhat clichéd. Not “CAN” be clichéd; “SHOULD” be clichéd. Don’t let the audience inwardly backtrack because a description is trying to be too clever. Maybe you don’t have to say she looks equine. You could just say she looks like a horse. More people know what that means.

Audio description also has to be incredibly succinct, because there are limited pockets of silence or incidental music in which to narrate. So this teaches you what’s important and what bloomin’ isn’t. At one point in the aforementioned Apprentice episode, the candidates enter the boardroom, and the narrator doesn’t describe Katy flicking her hair, or Simon strutting; it says “the men enter the boardroom first, leaving Katy to follow behind”. It picks out what’s most important.

I don’t know who writes these audio descriptions, but their work feels like a scriptwriting masterclass. Maybe there’s this whole unknown and undervalued pocket of writing talent out there. Or maybe Hemingway didn’t die in the 60s.

Mmmmmm. He makes such gorgeous use of those dog treats. 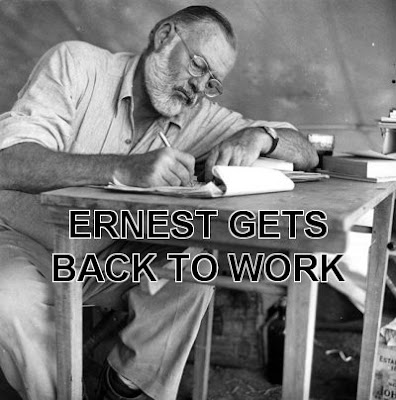 3 thoughts on “Screenwriting Tip: Audio Description For The Blind By Eleanor Ball”

previousWrite What You Know? Then Write About Being A Writer! : P by Eleanor Ball
nextSwearing: New ****ing Rules! By Eleanor Ball