Why You SHOULD Do A Course In Scriptwriting by Eleanor Ball

Last week Lucy penned a really useful post on media careers and what to do after a media course, which inspired me to churn out some thoughts as a meedja student about to face the abyss.

I’m in the final term of a scriptwriting MA, which means much less classes, and much more closing the curtains on warm sunny days. Not to get too personal or anything, but here is a snap of my Halls of Residence bedroom floor: 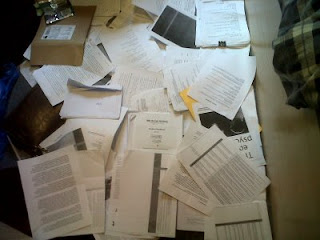 … So what that photo probably tells you is that when I’ve finished with something I literally just THROW it from my person with great force, but what I mean to say by the photo is that a scriptwriting course is lots and lots of work. Readers of this blog probably know this already from experience; but if there are any of you in the same scenario as I was a year ago, wondering if a scriptwriting course is worth the time, money and shrapnel, I’m gonna say yes.

It’s annoying trying to decide if you should “study” scriptwriting, because there’s contradictions and anomalies firing from all directions – and all cylinders. There’s people who attach scriptwriting courses to a loss of individuality, then there’s people who see it as vital for survival. Then there’s all the bods in between. And even after wrapping our heads round all the contrasting opinions from all the loud-mouthed writers we admire, we’re still left with the fact that WE’RE creative ourselves, and therefore we gotta annoy ourselves by philosophising before we come to a decision.

Which means worry about our integrity. Will a course iron out all the little kinks that make me my own writer? Will a course replace my opinions with someone elses? Will I get cookie-cutter feedback? Will a course trivialise the art of writing? Can you teach art? AND WHAT IS ART ANYWAY? WHY ARE WE HERE? Then you have to go to bed because you broke your brain, and you wake up the next morning only to find that you still can’t come to a decision.

If you really really want to be a scriptwriter, do a (good) scriptwriting course. The idea is to go into it with confidence. Unless you sign up for a course ready to be beaten until you’re a walking textbook, creative individuality is not so wispy as to be blown away by a gust of academia.

Scriptwriting courses teach you skills that increase the chances of getting your script read. I’ve also found the course very helpful in learning about the ways and faux pas of the industry, which is tortuously complex. Or, at least, it seems that way to me. I only really know about scriptwriting in the UK rather than globally, but such a teeny percentage of it seems to be about actual scriptwriting. As Lucy said, you can’t just sit in your bedroom writing. Most of it is about socialising, attitude, flexibility, and whether or not you have little Batman-themed post-it notes.

But what about if you get your soul destroyed by networking?! On a scriptwriting course, you have to network if you want to scriptwrite scripts after you scriptwrite the scriptwriting course. You flaunt “scriptwriting student” as a selling point, which makes you vaguely attractive to people in the industry because you might-be-the-next-big-thing-but-probably-not-but-just-in-case.

Confession time: I’m kind of naïve and optimistic (I don’t know, maybe you picked that up already…), because I overdosed on cynicism as a teenager. As a result, I view networking with rose tinted glasses, insisting that everyone is being nice to one another because… well, they’re nice and that’s all. At a networking party, I don’t stare at everyone’s nametags looking for the biggest names; I drift over to the people whose company I enjoy the most. Everyone figures out what method of networking suits them personally, and, for people like me, I recommend the try-not-to-be-over-professional method. I’m not exactly a cool and crisp type, what with being perpetually terrified that I’m gonna crash into a table Miranda-style and the whole room will stare and I’ll be exiled from London.

If fear of networking is stopping you from doing a scriptwriting course, then don’t let it. You do have to network, but you don’t have to approach it in the same way as everyone else. There’s a billion books on networking, and loads of good advice about how to do it professionally and formally, and a number of training courses too, but I’ve been to a few events now when you come face to face with an aficionado on the subject. And as they charm you effortlessly and use all the correct hand gestures and gaze DEEP DEEP into your eyes, puncturing your very retinas with their charisma, you can tell you’re being Networked.

But yes. Do a scriptwriting course. Yes yes yes. It might be intense, but it’s practicable, it’s enjoyably sociable, it’s intensely motivating, it can teach you stuff you didn’t even know were the basics, and it can make you a real life scriptwriter. If that’s definitely what you want…

ON THIS BLOG BEFORE ABOUT SCRIPTWRITING COURSES:

Creating Your Career: Life After A Scriptwriting Course

University – worth the money?

Studying Writing: Being a “Lone Ranger” vs Going To University