Bang2write’s fab intern, the mighty Eleanor Ball has decided to tackle a BIG subject for her first official blog post – and why not? Please direct any questions, comments, etc to her here in the relevant section or over at Bang2writers. Enjoy! 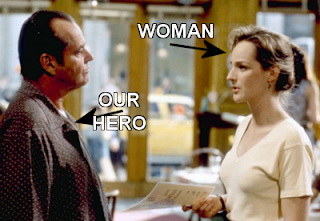 My script is about a group of girlies. People keep asking me if that would eliminate the male half of the audience. No, damnit!

It’s an interesting challenge, trying to make a sitcom with mainly female characters appeal to all chromosomes, but it’s a shame I took it for granted that it would indeed BE a challenge. It shouldn’t be a challenge.

Both men and women watched The IT Crowd and Black Books, two sitcoms with predominantly male characters. And if basement-bound geek Roy or glowering book-seller Bernard had been female (I think Jessica Hynes could’ve played them both magnificently), surely the audience would’ve remained roughly the same. Unless we’re just talking about fancying Dylan Moran. 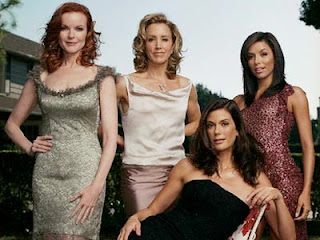 It’s the same in Desperate Housewives, another famous all-female group. Creator Marc Cherry once said the show is supposed to represent stereotypical women from old soap operas, but even that is outweighed by the fun drama of the show. I was talking to a classmate yesterday — an action movie obsessed cagefighter who drinks those high protein meal replacement thingies — and he shiftily mentioned that he loves Desperate Housewives. Men watch Desperate Housewives, I’m pretty sure everyone knows that. Desperate Housewives is not about women’s issues, it’s about revenge and lies and friendship and family and peer pressure and mob culture and unbridled entertainment so undiluted that you might as well inject it.

See, fun for all the family. Boys and girls alike. Being female isn’t a “hook” or a “twist”, and it’s not “PC” to have female characters. Groups of female characters are just as likely and default as groups of male characters. I’d love to see a coincidentally all-female group of characters somewhere. But if that happened, they’d be marketed as “female con artists” or “female pirates” or “female Christian abseilers”, as if 51% of the world’s population is a minority.

So I’m going to get back to the challennnnnnnge of writing an all-female group of characters for a mixed-gender audience, by making it completely irrelevant that they’re female.
—————
Eleanor is on the MA Scriptwriting degree at Goldsmith’s, specialising in comedy drama. Join her on Facebook here and read her own blog, here.

6 thoughts on “Personality Is Personality: Making Gender "Irrelevant" In Characterisation”