The Criticism Sandwich by Eleanor Ball

Don’t know about you, but I can be cripplingly sensitive when it comes to feedback. Actually, to hell with it, I DO know about you, dearest new bang2writer chums, because we’re all creative and therefore much of what we do comes from deep within, unless we manage to roboticise the process. A cold word about something that I’ve poured my soul into (even though my soul is currently on the market if you’re interested) can turn me from confidently chipper to wildly scribbling down plans to leave the industry and run away to raise mustangs in the Nevada mountains.

Of course you can harden with experience. There’s all these blogs in which the writers share what stony criticism they’ve received that day, only to blissfully announce the very next day that they have a great new idea. Even though the LAW says they’re supposed to have committed suicide by then. All I can do is stare at the screen in dazzled hero-worship and yearn for the day when I’ll have their hard skin. But I’ve also heard from seasoned writers who throw themselves under a boat the moment they hear the slightest hint of criticism, so unfortunately experience isn’t a sure-fire remedy for creative sensitivity.

As for giving criticism without puncturing the heart (ego?!) of a writer, one of the most common pieces of advice is THE CRITICISM SANDWICH. Self-evidently, the idea is to “sandwich” your criticism between two slices of good feedback. Great setting, crap idea, and well done for using recycled paper. Criticism sandwich. But what an ambiguous term. You wouldn’t normally eat two pieces of bread on their own. But surely we gobble up good feedback?! Good feedback is nourishing. But criticism is the vegetables on the side of the plate that you don’t really want to eat, but you know you have to because you know they’re good for you.

… Okay, I’m getting my food analogies muddled up. I’m going to break for lunch.

Anyway, when it comes to the criticism sandwich, don’t we sort of know the game already? Yeah we got it figured. If we hear some good feedback we know the bad stuff is on its way, especially when the good feedback is suspiciously irrelevant, or even decadent, as if they’re scraping the barrel a bit. I really liked that bit on page 15 where Sam is wearing orange trousers. I loved that there wasn’t much swearing. I enjoyed that the vampire was a lesbian.

Maybe it’s a wee bit patronising to assume that we need a bit of ego-strokage before we can handle some important and constructive criticism, but then again, maybe that’s a good assumption. I certainly feel better after a bout of useless compliments, even if they are just token and tact.

But putting aside potentially condescending tactfulness, maybe the real problem with the criticism sandwich is that it puts “positivity” and “negativity” in two completely different camps, telling us that we can hear only “good” things and “bad” things. So the issue is a writer’s approach to feedback, and the tendency of some to hear constructive criticism as a dire personal insult worthy of leaving the industry and running away to live with wild mustangs. 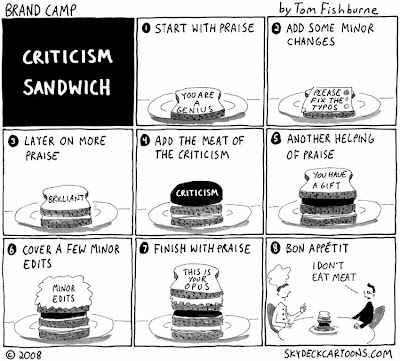 3 thoughts on “The Criticism Sandwich by Eleanor Ball”