When Do I Give Up My Day Job? 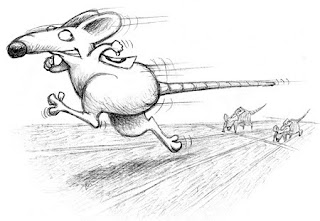 Following a short flurry of conversation on Bang2writers yesterday (and having been asked many times before), I thought I’d address this question. [DISCLAIMER: obviously these are just MY experiences and thoughts on the matter, not absolute gospel, so please consider all the factors and important people in YOUR life before making any huge life-changing decisions… End of disclaimer.]

You give up your day job when the bills can be paid via writing and not a moment before.

Except there are the following problems with the above:

1) A freelancer’s life is “up in the air” – there’s no guarantees of work, ever. So even if you have a fair bit of paid work now and CAN pay your bills even for the next year? Maybe you won’t be able to NEXT year. Then what?

2) Most of us won’t make *that* much money. TV is where the money is and TV writers do get paid quite well, though they have to work extremely hard for their dosh. Freelance Journalism can pay OK (dependant on the title/company you’re working for) and corporate work, ranging from things like play themes, adverts, text message alerts, toys and games to things like CD Roms, audio books, etc probably ties with that or closely brings up the rear. I hear radio can pay OK (I have never done a radio play, though I’ve written some radio adverts back in the day and the pay was fine). Film in comparison will most likely come waaaaay down the scale, ranging from a decent wage to absolute zero and EVEN LESS as people invest their own money in it, meaning a freelancer could end up in the minus figures.

3) We still need time to write specs to get noticed – and get any of the above or collaborations of our own. And spec writing means no dosh again.

Yet despite the very obvious downside of likely earning very little money, it’s easy to see why the freelance life appeals. It’s the life I chose and even allowing for some very difficult financial situations of various complications over the years, I’d choose it again without a second’s thought. Here’s how I did/do it:

I started on corporate writing jobs. It was a great learning curve, but ultimately I found it rather dissatisfying. Nowadays I work TO write: in other words, I involve myself in the industry via script editing/reading, the occasional DIY job or collaboration and write various things for various people/places (like Deviation or London Screenwriters Festival) and help organise stuff. I also do a bit of teaching/tutoring. In other words, I do a variety of *stuff* to create relationships with my peers and colleagues whilst earning dosh here and there when I can just like any freelancer. Freelancers work very much on a “famine or feast” basis, which can be very stressful – so if you’re the type to freeze at sudden deadlines or have a heart attack when you get hit by unexpected bills, then a freelancer’s life is probably not for you.

However, for me, this lifestyle has one big upside: it allows me to write on spec. I can structure my work *around* my specs or vice versa. I never have to wait for clocking off, nor do I have to justify anything to anyone, as long as I do what I’m supposed to do as well. I get to work alone for the most part (which I prefer), but know I have a contacts book full of people I can email, skype, phone, tweet or message when I need them. Though there have been dark periods in my working life where I have questioned what I was doing, 90% of the time I feel very satisfied. If you work in the rat race, I can see why a freelancer’s life is appealing. I’ve worked in offices and whatnot; never again.

However, I always wonder if quitting TO write 100% full time is worth it, since writing for money invariably means writing stuff you don’t actually necessarily WANT to write just in order to make money. If you love “writing, the process” then there’s absolutely no problem and you should go for it… But if you dream of writing YOUR OWN STUFF, ie. your specs – as I’ve heard SO many Bang2writers desire – then perhaps keeping the day job might be your best option.

Yes, you heard right: don’t stop writing… but KEEP your day job. Here’s why & how:

1) Less stress. Money worries are incredibly debilitating, especially if you have a family. A regular pay cheque can not only keep you sane then, it can free up your creativity that will otherwise get blocked by very real concerns about paying mortgages, buying kids’ school uniform, etc.

2) Inspiration. Working with other people – even if you hate them – can create observations for your own work. Some of my best characters started as students from my classroom. There’s less opportunity for this if you’re seated at home just in front of your computer.

3) Downsizing # 1. Some Bang2writers tell me their jobs give them no time to write or think. So what about getting a job that FREES YOUR MIND UP? I worked in a supermarket for a bit. Yes, it was dull as. But guess what – I had plenty of time not only to plot the gory death of half the rest of the staff, but to write in my notebook and plan various storylines, etc. Something I wrote waaaay back then just became part of my novel.

4) Downsizing # 2. Maybe you have a well paid job you hate to keep up a certain level of rent/mortgage or lifestyle… Happens to a lot of people. Those obligations then often get in the way of someone approaching their dream – ie. writing – because MONEY essentially gets in the way. My argument is always thus: if you hate the job, get a new one and get a new, smaller lifestyle – you’ll be happier in the long run going for that dream (whilst being poor). The reason I argue this is because I’ve NEVER heard anyone say, “You know what? I really regret downsizing my life and attempting to live my dream”.

Sometimes people say they “can’t” disappoint husbands/wives/partners/kids or ask them to live with less. But if they love you, why would they say no? [*without good reason* – thanks Steve! ; P ] You can negotiate terms and conditions – ie. “we move *here* for *this amount of time* to free up *this amount of money* to *do this*”. Maybe it’ll work out. Maybe it won’t. My kids don’t have any of the fancy stuff their friends have; I shop in Primark and Lidl. So what? My son wanted an XBox, but I can’t afford big presents like that at Christmas or birthdays. Did he complain? Nope – instead he saved up various bits of money relatives gave him on those dates and when they visited, etc. It actually taught him a valuable lesson – you can’t have things right away – and he’s not missed out at all.

Similarly, if you’re deathly poor – what’s to lose? Once upon a time I was on benefits as a single Mum. I didn’t want to be, but living where I did – in the middle of nowhere – jobs were scarce and those places that were hiring did NOT want an eighteen year old with a dependant when they could have a shackleless eighteen year old instead. I broke my back making application after application before realising I could be using my time a lot more wisely than banging it against a brick wall. So I wrote some scripts and applied to university. The rest is history.

So, concluding: I don’t think it’s so much “When can I give up my day job?” so much as, “How do I work TO write?” or even, “How do I alter my lifestyle to help me live my dream?”

You can make a start on that TODAY. So, don’t wait – go on then.

previousRoutine Vs Inspiration
nextQ: How Do I Analyse A Script??