I’ve long been a fan of Hollyoaks. I was in right slap-bang in the teenage target audience when it started, so have literally grown up with it. I’ve watched it transform itself from just a few characters with the likes of Ruth, Lewis and Tony – the latter the only remaining original cast member – to what it is now, via multiple blowings-up of local pub The Dog In The Pond and its nightclub across the road The Loft; copious amounts of murder; the kidnapping and orphaning of various children; not to mention a series of rape trials, including the first depiction of male rape on TV via the Hollyoaks Late Night Edition.

What’s most interesting about the show at the moment however is the fact it has room for not one, but TWO larger-than-life complete and utter psychos in it – and it works!

SO IN THE RED CORNER WE HAVE… 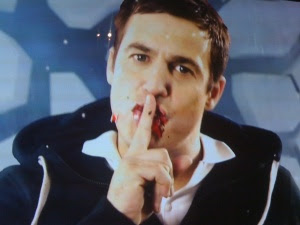 Warren Fox. Warren is very much your OLD SCHOOL psycho – and he’s been in Hollyoaks for yonks. He’s a big bloke, imposing – and has the war scars to match. Like everyone else in Hollyoaks there’s NOTHING he won’t do, including kill his own bride on their wedding day! He’s also faked his own death, pretended to be a ghost and feigned amnesia; he’s gone out with girls barely out of school and even dangled them over the side of buildings. But Warren has a softer side, too: he’s got a foster brother with learning disabilities, Spencer – and we’ve seen his love and care for him. Since Spencer has gone, we’ve seen that same love and attention lavished on Theresa McQueen – not in a sexual way, but in terms of making sure she and her baby Kathleen-Khloe (with a “K!”) are safe; he even saved them both from a broken lift shaft.

So, to sum up: Warren is an evil, imposing snake with a soft side. He’s a ladies’ man and can have any girl he wants. He’s a clever businessman and as wide as they come, but is not afraid of the law or hiding his activities, though police can rarely pin anything on him. He takes care of those he loves and WILL SLAM DOWN ANYONE WHO GETS IN HIS WAY.

… AND IN THE BLUE CORNER WE HAVE: 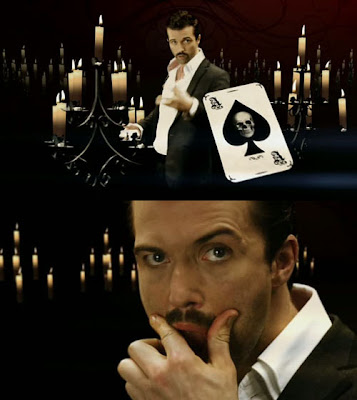 Brendan Brady. Brendan’s not *from* Hollyoaks, he’s an outsider – and has left an ex-wife and two kids (not to mention a well dodgy past) back in Ireland. He’s a more traditional style of businessman than Warren; he doesn’t like the police poking around. Like Warren, he is prone to RAGE, but unlike Warren he is quiet, unassuming yet has an air of neverending menace – though Warren loves to bait Brendan, he nearly always stays well back. Brendan is the brother of Cheryl, who couldn’t be less like Brendan if she tried. Most striking of all however: Brendan is gay. Though he has a tendency to sleep with women, it’s local chef Ste he ultimately always goes back to… But despite loving Ste, he TREATS HIM LIKE SHIT and even beats him up. As Ste’s own (female) Ex Amy says, “I feel sorry for you, hating yourself as much as you do.” Brendan hates both the women in Ste’s life – Amy and Rae – because they have the measure of him; it’s his “Achille’s heel” if you will… But crucially, it’s worth noting: Brendan’s NOT a bad person because he is gay; he’s a bad person who happens to be gay. 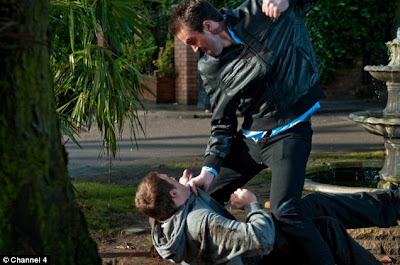 Warren and Brendan are two VERY different takes on the antagonist role function: Warren is the more “traditional” approach, with Brendan coming out of the left field. Gay characters are so often the best friend or mentor for another character, yet why not gangsters and psychos? But it’s important to note there’s not necessarily anything wrong with taking the more TRADITIONAL approach either: Warren is a successful character in his own right – and again, why not? As fun as it is to see a character as original as Brendan – I don’t recall seeing anyone quite like him in hundreds, perhaps thousands of viewing hours of continuing drama – role functions DON’T have to push the envelope automatically to be “good” (though all good characters need to be “not the usual”).

Concluding then, when creating characters:

1) Are you creating someone within the “expected” or “unexpected”?

2) If “expected”, what differentiates this character from what has gone before?

3) If “unexpected”, are your characters’ traits organic to the story or just plain weird/unbelievable?

3 thoughts on “Surprising Characterisation: A Tale of Two Psychos”