Genre Vs Drama: Right At Your Door 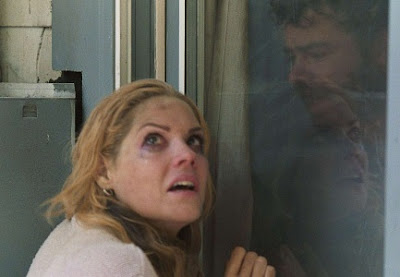 I frequently read spec scripts that fall somewhere *in-between* genre and drama. This is a significant issue for writers in terms of getting their spec noticed, since it can be difficult for others “higher up” the food chain – agents, producers and the like – to assess whether said script *can* work and even, if the writer really knows what s/he is doing: did they MEAN to write it like this? Or is it a mistake? Do they know WHO they are writing for?

2006’s Right At Your Door is a FAB idea. Charting the drop of a dirty bomb on LA, we see the catastrophe from one man’s POV from of his own house when his wife has just left for work. He of course tries to find her, but in the ensuing panic is unable to; he is forced to return to his home, as directed by Army officials. He leaves the door open as long as possible, hoping against hope for her return. Eventually however, he has to make the difficult decision of sealing up the house as directed by the emergency radio news bulletins.

Then of course she returns.

What does he do? She’s clearly been exposed and wants to come in. He loves her and wants her to come in, but he also wants to live. ARGH: nightmare situation. He ends up leaving her outside on the porch and even resists her attempts to break in. Even worse, there’s a child wandering about outside who appears to have lost its parents and those creepy face-masked Army Officials turn up from time to time and mark the house with a red flag, with the man sure they will come for his wife at some point AND TAKE HER AWAY (the subtext being they will kill her, for being exposed).

Looking at this aspect of Right At Your Door, it’s very clear this is a very HUMAN drama. We’re not watching explosions, panicked crowds or close ups of people clawing at their own throats and dying. Instead, we’re invited to see the tragic, yet nevertheless SMALLER story of a couple who are left literally on either sides of the glass when something terrible happens. We’re asked to believe the husband will choose his own life over his wife’s and chart the disbelief, denial and then acceptance of the wife that he has done so. A fantastic, visceral and arresting idea for a drama.

So why did I feel Right At Your Door had an identity crisis? My reasons:

Title. Right At Your Door screams “drama” to me, rather than genre which typically favours one word titles: ALIEN, INCEPTION, DEVIATION, etc. But it strays into genre territory regardless, without ever really picking it up and running with it, more next.

The Stranger. There is another character in the man’s house, whom he finds there in Act 1 when he returns from looking for his wife after the initial blast. He shows compassion for this man and lets him stay in a way he doesn’t for his wife, which feels confusing and suggested – to me, at least – this *other* man may have some kind of ULTERIOR MOTIVE for being in the house or will betray them both in some way. Except he doesn’t – and promptly leaves somewhere past the mid point. What was this other man’s role function? I was not sure. What’s more, his escape from the house has a direct effect on the twist ending – see that section – yet is never commented on.

Timing. It’s hard to tell how much time passes in Right At Your Door, though if I recall correctly it’s approximately three days. This puts it right in genre territory, but never once do we get the “real” feel of a clock ticking. The *other* man even says at one point the Army Officials will be returning “in the morning”, but we cut from the night to the morning in a “dramery” way, rather than countdown style. What is it to be?

Deadlines. Yet in contrast to the above, like all good genre films, the Army Officials set a DEADLINE for the situation to be sorted out: they come to the door and the man won’t let them in, though he does tell them his wife has broken in (though she is not there at present). They ask him to collect some ash from INSIDE the house for them to analyse. They then tell him they’ll be back with the results, the idea being the wife *may* have condemned the man to death with her actions and his time may be RUNNING OUT.

Twist Ending. Most surprising of all, for a drama, Right At Your Door has a twist ending. Dramas are best known for devastating endings, but this one felt as if it came out of the left field for me and seems as if it’s suited far better to a thriller than a drama. The Army Officials of course come for the wife as set by the deadline – and the man is left to watch helplessly as they drag her away. Bad enough? No of course not – one of the Army Officials breaks it to the man he’s made his house airtight and the disease dropped by the bomb has incubated like mad, with the man himself a LETHAL CARRIER. In other words, he SAVED his wife leaving her out on the porch. And of course the Army are now going to kill the man by flooding his house with gas. Which they do. But if this is the case, the *other* man who had been in the house is also a LETHAL CARRIER, yet there is no mention of him nor *that* obligatory shot of him at the end disappearing into a crowd and taking the infection with him, as with typical genre films, either. Also, let’s not forget the man sealed up his house as directed by the GOVERNMENT via the radio bulletins – so surely more houses have done the same and created this super toxin within them?? Logic didn’t work for me.

I actually had a lot of admiration for Right At Your Door; I thought the actors did an amazing job in particular. But it does sum up for me WHY it’s so important to pick one OR the other – drama OR genre – and run with it.

2 thoughts on “Genre Vs Drama: Right At Your Door”

previousGuest Post: Writing AND Finishing The First Draft Script by Steve Bromby
nextGenre Vs Drama # 2: Master of None?