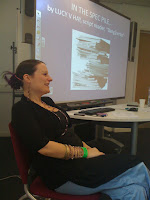 I was at The Southern Script Fest this weekend just past. The SSF (follow on Twitter here or join the Facebook group here) is a new event run by Bournemouth University, by students for students and professionals alike. They had a great line up of speakers, including Smack The Pony and Green Wing’s Fay Rusling, Coronation Street’s Jonathan Harvey – and of course, lil’ ol me! I was talking about what can be found lurking in the spec pile, both in terms of genre and those recurring elements such as craft (ie. overwritten scene description) and those more surprising, pet peevey elements, like the weird fact SO MANY SCRIPTS open on alarm clocks going off and characters getting ready for the day! Definitely a writer’s event to watch out for in the future, bookmark it now! 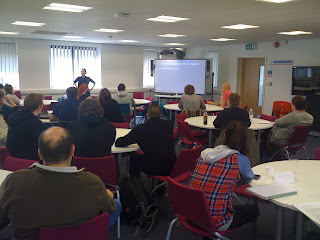 My talk went really well and I totally overran by about half an hour – and STILL didn’t get through *all* my slides! This was down to the impressive interaction of the delegates: they really knew what they were talking about, asking insightful questions and making great observations. I really enjoyed myself, even if I totally didn’t stick to the “start late… and finish early” scriptwriting mantra! I saw Danny Stack and Tim Clague floating around briefly at the FREE LUNCH (genius!) and me ol’ mucker Chris Jones of London Comedy Writers Festival was there too and in the afternoon we heard some really good pitches when we found ourselves on a panel (SUBLIMINAL MESSAGE: bought your ticket yet??? Use discount code BANG2WRITE to get £25 off!!! END OF SUBLIMINAL MESSAGE). 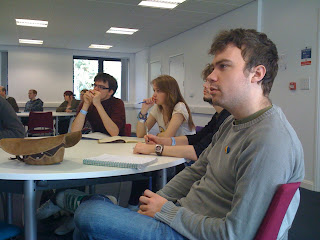 For those of you who couldn’t make it, here’s a quick round up of several things that came up in my session and in the questions afterwards:

The misandry of spec realist drama. You will oft hear me talking about the misogyny of the silver screen, but something I feel JUST as passionate about is the representation of males, particularly working class men, in some of the spec dramas I read. Too often these realist dramas place the blame for society’s woes at the feet of apparently lazy, violent addicts on the dole who all live on sinkhole estates and beat up their wives and girlfriends. Go beyond stereotype and break the mould.

Harder Sell # 1: Cliche. I provided extensive tongue-in-cheek lists of cliched scenes and ideas I frequently see in scripts and explained why they drove me MAD, such as the “they were dead all along” idea or the scene where someone spits their drink out in surprise – YARGH! But it’s important to remember that a cliche is not a cliche WHEN IT WORKS. Anything *can* work, given the right context.

Harder Sell # 2: Familiar Ideas. There are lots of ideas that seem to go around and around, year after year. Rather than think then, “I *can’t* do this, script readers have seen it before”, consider this: there may be a GOOD REASON it keeps coming back, even if it hasn’t made it to screen YET. Perhaps you’re the one who can make this idea finally work? To do this however, you need to recognise you need enough differentiation to *make* it work.

Originality is overrated. Producers AND audiences want “the same… but different.” They’re not sure *what* to do with something 100% original that’s never been seen before. That’s not to say it’s impossible to get something entirely original on screen, but it is difficult. There’s NOTHING WRONG with creating a “new take” on something we’ve seen before… In fact, it’s to be ENCOURAGED.

Genre. Knowing your genre conventions is SO IMPORTANT, whatever you’re writing. Whilst “new takes” are good, try and reinvent the wheel and you may end up writing something completely different to what you intend.

Confidence is key. I hear so often at talks from people who talk DOWN their own writing or scripts. DON’T DO THIS. Instead of thinking, “Argh, my script is not working” or “my writing is rubbish”, turn it around: think instead, “What IS working in my script?” or “what element am *I* good at?” You WILL find something, however small. Build your confidence from there.

See the rest of the photos from the session, here and join my growing troop of Bang2writers here!

previousGuest Post: Is Film Criticism another Casualty in the Culture Wars? By Kitty Holman
nextGenre And Craft