Round Up: Things I’ve learnt from TV… 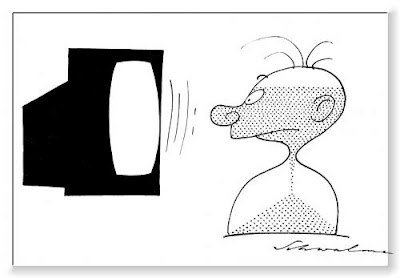 If you follow me on Twitter or are a member of Bang2writers on Facebook, you will have seen my “Things I’ve learnt from TV” posts all this morning – and indeed others’ contributions too! Some of these are strictly tongue-in-cheek, but others are quite interesting as they reveal lazy and/or cliched ideas relating to characters, their motivations or even plot devices. Mine are those without the @ signs – if you like others’ ideas, why not look them up on Twitter or Facebook?

Check out the round up:

Women only find bastards who treat them badly sexually attractive.

If you’re a woman & there’s supernatural shenanigans going on in your home, your husband won’t notice.

If you’re a single woman aged between 25 -35, a gay friend is mandatory.

Pregnant women and new mothers are nearly always mentally ill or accused of being so.

If your baby dies unexpectedly, you or another member of the family will be accused of killing it.

Women only ever go to the loo to take pregnancy tests.

Men only ever go to the loo to get attacked/beaten up/murdered.

Teen girls who find themselves pregnant nearly always *almost* have an abortion then back out last min.

Teen girls who DO have abortions ALWAYS regret it &/or are villified by family members.

@jackatron4000 if you’re pregnant when the show starts, you will have (or lose) the baby by the end. No exceptions.

@Natt Never promise a child that you will be back for their birthday (or Christmas). You will not.

@Helena_Ward if you are a really ugly bloke with the personality of food poisoning you WILL get the best looking women.

@FunJoel If a woman throws up, she must be pregnant.

@lougerring A character who says they have quit smoking will invariably be chain smoking by Act 2.

@lougerring When characters are having a hard time, they always sit in front of a photo of their deceased loved ones.

@jtr1812: No woman is happily single. We all desperately long to be married with children.

@warrenforster: If you suddenly have a cough, you’ll be dead within a few days.

Emma Whittle (Via FB): If pregnant, women’s hands are ALWAYS either on the small of their backs indicating exhaustion and suffering or blissfully stroking their bellies.

NO ONE is happily married or co-habiting.

If you are a middle-aged woman, you will suddenly find teenage boys irresistible & embark on a torrid affair with one.

If you are a middle-aged woman, you will throw away 20 yrs or more marriage for an affair with your first love.

If you break up with someone, they will stalk you and try and kill you & your new partner.

If you’re a middle aged woman, your husband is having an affair. Especially with your sister.

If you’re a middle aged woman & you suspect your husband of an affair, he’s *really* a murderer.

if you’re a married man, you will be frustrated & angry & isolated from your wife and children.

@JulieMayhew: An argument is not complete until someone says, “you just don’t get it, do you?”

@Mrgringostarr: A hug hasn’t resolved any unrest if the ‘hugger’ keeps his eyes open.

@incursionmedia: If you have a big event, you always go and drink hard the night before.

@Mockwriter: If you’re getting married, things WILL go wrong on the big day.

@Michael_R_Grant: If you get engaged at the start of the episode, you will die.

@MockWriter: Happy Ever After is just a myth.

@Hilarymackelden Never fall in love with the hero. You will die.

@Michael_R_Grant: Never be a relative of Jessica Fletcher. You will die.

@Mockwriter: No matter how poor you are, you’ll always have enough money for a pint.

@jackatron4000: it is impossible to be asthmatic and not have an attack on screen. You will also lose your inhaler.

@Mockwriter An endless stream of relatives will suddenly turn up.

If you are a cop, at least once in your career you will be accused of a crime you did not commit.

If you are a doctor or nurse, you will be admitted to the hospital you work at or even die there.

If you end up murdered, your body will be discovered by police in an intriguing pose that protects your modesty. (What’s more, the pathologist doing your autopsy will never be permitted to look at your bits).

GPs, especially in Aussie soaps, do house calls 24/7 at AND will work in hospitals as well.

Hardly any working mothers *want* to work & if they do, husbands frequently blame them for it.

@Mockwriter: Everyone in soapland works within a 2 minute walk of where they live.

@dodgyjammer: If a husband compliments a dead woman when speaking to police,he was CLEARLY having an affair w/her.

@fnafilms: if found dead, you won’t be wearing your “period” knickers or have evacuated your bowel (LV: thanks for that *lovely* image Z!)

William Gallagher (Via FB): When police officers ask you if they can use your toilet, it’s always upstairs right next to the suspect’s bedroom.

Gavin Johnson (Vis FB): If you’re in a cop show, your partner is corrupt and taking back handers. No matter how clean they look or act.

Adam Wilby (Via FB): If you’re a serial killer, you need only casually stroll after a potential victim who is running away and they will never increase the distance between you…

If you’re hit in the head with a blunt object, you won’t die, but you will lose your memory & go missing.

If you knock on the bathroom door & there’s no answer, it’s because your loved one has slit their wrists in the bath.

Crime *never* pays… except if you’re in a US TV drama, in which case it really does.

Despite the handicap of being dead (no blood flow) Vampires are sexy enough to get erections regardless.

Aliens exist and there *is* an Afterlife.

@donmcvey No such thing as morning breath.

@antonsays: Whatever you’re saying is more dramatic if you’re simultaneously looking out of a window.

@Mockwriter: In Eastenders nobody owns a washing machine.

@Helena_Ward No one has more possessions than can fit in a small holdall (or stripey washing bag if you live in soapland).

@ScriptPunk Regardless of programme, if something dramatic and cliffhanger happens I expect the Eastenders Drums.

William Gallagher (Via FB): If you visit a new location, you will always go back there before the end of the episode. (New locations are too expensive to be used only once.)

Pete Darby (Via FB): Most alien species are anthropomorphic, sexually dimorphic and, despite being oviparous, will have a “female” gender with boobs.

Peter Darby (Via FB): Despite not breathing, Vampires can talk and smoke.

Steve Fiori (Via FB): If someone says “Never ever in a million years will I do that” or something similar, they will be seen doing it quite soon after.

@Mockwriter Things I’ve learned from TV: I obviously watch too much TV.

1 thought on “Round Up: Things I’ve learnt from TV…”

previousBuy Your CWF Ticket With Discount Code BANG2WRITE… Or This Bunny Gets It!!!
nextHappy International Women’s Day: Girls On Film