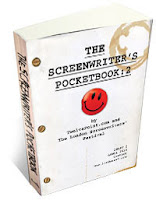 So all week on my social network I’ve been going on and on about The London Comedy Writers’ Genre Festival, which takes place at Regents’ College, London the weekend of April 9/10th, 2011. But if you don’t follow me on Twitter or Facebook (why not??), you may not know about it – so here are all the details.

The London Comedy Writers Genre Festival came about directly from the feedback of London Screenwriters Festival delegates and a survey we conducted recently, where we asked YOU what you wanted next from Team LSF. A festival dedicated to the craft and production of comedy in all its forms was the overwhelming answer for the staurday – and you wanted a relaxed networking event in conjunction with expert script clinics on the sunday.

SO YOU GOT IT!

There be 30 fantastic events, with 50 brill speakers and room for 400 delegates. Regents’ College is a fab venue and I am so pleased we’ve got it again. We have some fabulous guests already confirmed, with PLENTY MORE where they came from… I will of course be there – though this year I will mostly be waddling like a duck, as I will be approximately 30 wks’ pregnant on the date of the festival, so please feel free to see ME as a comedy event too.

In the meantime, I am bringing together a new screenwriters’ pocketbook especially for the event, dedicated to comedy writing and genre writing in general. This year we will have new articles from (amongst others!) Billy Mernit of “Living The Romantic Comedy”; Bill Martell of “Script Secrets”; Scott Myers of “Go Into The Story”; Scott The Reader of “Alligators in a Helicopter” and Jenny Roche of “Teach Yourself Comedy Writing”. These guys are all awesome and I can’t wait to see what they come up with!

Tickets for The Comedy Writers Genre Festival are currently on the early bird price of £119 inc VAT (buy before Mar 18th), that’s a whopping thirty pounds off! Don’t miss out.

previousGet This, Writers: No One Will Steal Your Script!
nextYou Can *Know* It… Doesn’t Mean You’re Doing It