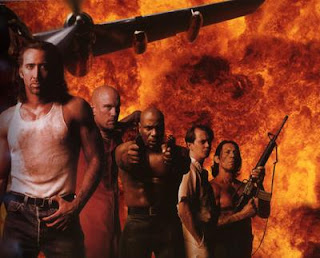 Dev Execs want the “same… but different.” But crucially, so do the audience. Every time someone does something cool and new, do we say “Hey, let’s invest in other cool and new stuff and push that boat right out”?

No we do not. The Dev Execs say, “Let’s REPLICATE THAT SUCCESS!” And the audience say, “You know what? I’d love to see a sequel or a remake or a reboot or something VERY SIMILAR to that other thing that was cool and new and I ENJOYED SO MUCH.”

I often think how successful a film is deemed should NOT be measured by its devotees (like screenwriters and fans), but those who need persuading to watch them. My mother doesn’t watch films, but for some reason she caught DIE HARD one Christmas, leading her to watch that Die-Hard-On-A-Plane (only not half as good IMHO), CON AIR. Did she enjoy it? Yes she did. For a retired piano teacher she likes displays of machismo, explosions and half-witty one liners, so it filled an hour and a half, amused her and lots of fellas had their shirts off. Gotta be good, right.

But instead, those hardcore devotees – the ones who can’t say, “live and let live” – seek to denigrate what moviegoers want to watch, as if anyone with half a brain *couldn’t* want to watch something as dumbly fun as CON AIR, so by definition anyone who does is dirt beneath the devotees’ shoe. The same goes for those who want to watch remakes, reboots, sequels or indeed anything else on the *commercial* scale.

But what hardcore devotees appear to miss, over and over again, is that for MOST people, films are *just* films. A way to pass an hour an half to two hours, perhaps together, perhaps alone, perhaps drinking alcohol & eating treats, perhaps not. Films are simple relaxation. They don’t know what goes into making them; more importantly, they don’t care. They know what they like and they know what they don’t – and they want to be ENTERTAINED.

Entertainment value counts for so much, yet the entertainment value of the average script in the slush pile is LOW. What “entertainment value” means can vary wildly, genre to genre; we’re talking explosions and quips in the action genre, to farce and grossness in the comedy genre and yes, extreme gore in the torture porn genre. People LIKE to see planes, trains and automobiles in terrible pile ups, yet the hero walks away with barely a scratch. People like to see characters fall over and hurt themselves in bizarre ways. And yes, people like to see others dismembered and killed in ever-more-gruesome ways (and outside of misogynism and racism, why not). And perhaps most importantly of all, people’s preferences for the above genres – and indeed styles of telling – vary just as wildly.

Yet instead of these above elements, the script reader is treated to chunks of pointless dialogue in the name of characterisation; endless moments of heroes contemplating their own or others’ fates; montage sequences that go on forever; flashbacks that serve only to confuse; comedy characters spouting endless quips or horror characters running… and runnning… and running.

Once upon a time, the slush pile was chocka with “worthy” dramas; now genre is the name of the game. But genre rarely plays out on screen in the way it is presented on the average spec’s page:

The genre movie on-screen is simple.

Let’s go back to CON AIR. We can call it “Die Hard On A Plane” cos that’s exactly what it is. We’ve got a bunch of prisoners this time, not terrorists, but they’re creating mayhem and people are at risk, including our hero Poe, his mate Baby-O (also a diabetic, to stack up those odds) and the female guard – who stacks up the odds by just being herself when there is a rapist on board by the name of Johnny 23 (for me, sigh – though there was a *certain* satisfaction to Poe beating his head against the cage with, “DON’T. TREAT. WOMEN. LIKE. THAT!”, not to mention the guard’s subsequent kick to Johnny 23’s face… hey, if we *have* to have near-rape scenes in films, that’s the way to do it.)

Poe is no John McClane; instead he’s a hardass Hick who won’t quit and says lines like:

“I’m gonna save the fucking day!”

“I just couldn’t leave a man behind”

But we can get on board with him because HE’S A CHANGED MAN and he’s NOT SEEN HIS WIFE FOR EIGHT YEARS or his little daughter, EVER. And besides, we’re not *really* that interested in him, it’s the villains who really gain our attention; there’s just SO MANY and they’re all SO COLOURFUL, whether we’re looking at Cyrus The Virus, Billy Bedlam, Garland, Diamond Dog, Sally-Can’t-Dance, Pinball or any of the other headcases on board. Besides, we know how this will play out; Poe WILL save the f***ing day and we’ll f***ing love it, else we wouldn’t have bought the DVD in the f***ing first place.

So, with the above in mind then, your premise needs to be sold quickly – and if you can take advantage of a “pre-sold concept”, then all the better. When we say “pre-sold”, we mean stuff the audience is already familiar with. So we’re talking “the same but different” (hey, “Like Die Hard – but on a plane!”) or a concept they already know – werewolves, vampires, zombies, serial killers in the woods, insurance salesmen who really turn out to be kickass hitmen. You know, the fun stuff. And don’t bother making up some new *thing*, make up a new angle if you can – but hey, sometimes you don’t even have to do that. Originality can be very overrated.

Keep it simple, play it out simple, pay attention to convention; THAT’S a genre movie. Horror movies need to be scary; thrillers need to be thrilling. Comedies need to be funny, but crucially need some shade as well (or at least a breather). Action movies need to BIG. You need to remember your audience. This is all obvious stuff, but again – so often missing from the spec pile. Script readers the world over can testify, for sure: a genre movie is not the “easy” option, not by a long shot.

Oh and by the way – anyone who thinks something like CON AIR must have been easy writing for screenwriter Scott Rosenberg is a nutcase. The reason it was so successful is because the Rosenberg didn’t overthink his characters or take the mick out of his audience by calling them a bunch of thickos, either. He provided sound, fun, fast-paced entertainment for people who like that sort of thing.

And isn’t that what we’re supposed to be doing, here?