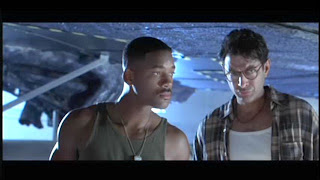 I must be having one of *those* weeks where I’ve slipped into a parallel dimension and become John August (I wish), ‘cos hot on the heels of yesterday’s post for Andrew Tibbs, the sublime Hina, aka DodgyJammer writes in to ask me this:

Okay, is two protags really a bad thing? If done well, you wind up with a richer story. There are a few movies with multiple protags, and Mr and Mrs Smith had two. The only argument I see against the two protag approach is ‘poor characterisation’. But come on, am I wrong to say IF it’s crafted well and the characters are written well, it makes for a richer story and increases likelihood of audience connecting to the film in some way?

First up, let’s address the whole “dual protagonist” thing and whether it *can* done – and of course the answer is a resounding “yes”. IF done well, Hina’s absolutely right; it totally CAN add to a richer story. End of. But…

… Let’s look at Hina’s example – Mr. And Mrs. Smith. Is Mr & Mrs Smith a dual protagonist story – really? ‘Cos looks to me like Mrs Smith is the one who has to *really* learn something – ie. to trust Mr Smith and people in general. But of course this is Hollywood and we can’t have even Ms Jolie learn stuff on her own (she *is* just a woman you know), so they chuck in Brad Pitt as well (‘cos fellas sell pictures *so much better*, you know). But Mr Smith is willing to go for it and abandon the plan much, much quicker than her – she wants to stick to the plan (ie. kill him) MUCH longer and won’t admit she loves him.

I believe we actually see dual protagonists A LOT less than we think. I’d argue often what *appears* to be dual protags on the surface, is instead a protagonist and a very good, very necessary secondary bringing up the rear, which often works best in partnerships, especially those with a comedic element. One such partnership that immediately springs to my mind on this same basis as Mr. And Mrs. Smith is the brothers Val and Earl in the horror/comedy Tremors. I would also argue the “buddy picture”, a staple of comedy is similar on this front – whilst Buzz Lightyear must face the fact he’s not a space ranger in Toy Story, it’s Woody who drives all the action – from shoving Buzz out the window, to rescuing him, to getting the mutant toys’ revenge on Sid AND ensuring they get back to Andy… All in ADDITION to Woody making his own realisation over his jealousy and how he must share Andy.

Far better and more obvious an example of traditional dual protagonists then is the oft-maligned Independence Day – Will Smith (the “brawns”) and Jeff Goldblum (the “brains”), but not seen together in the same room until after the midpoint. They share the same goal (“get to their loved ones”) before they meet; after their loved ones are deemed safe, they switch their shared goal to “save the world” – and of course, they do. More on this in my Script Tips Series: Advanced Characterisation.

Dual protags could work in ANY story, no one’s denying that. But potentially “poor characterisation” on a craft level is unfortunately not the *only* argument AGAINST using dual protagonists in your spec screenplay. This device is a calculated risk for the spec writer – readers (especially inexperienced ones) may call you out for it as a “mistake” and it could hold your script back, even IF the script is written well. It’s no accident the established writer has far more “irons in the fire” in terms of exploring various devices, be those devices dual protagonists, ensemble casts or even stuff like voiceover, flashback and dream sequence. Sad but true. However, just as I’m always saying to Bang2writers, just because something *could* very well happen, doesn’t mean you should NOT do it either.

With all this is mind then, it’s time to make an informed decision about Dual Protagonists (or indeed any other scriptwriting device deemed “risky”):

– is it *truly* best for the story you’re trying to tell?
– If it is, are you willing to take the risk *for* that story?
– or are there other, just as effective, less risky ways of telling that story?

It’s your script; only you can know. So decide!