Can’t Get Read? Yes You Can! 16 Top Tips On Becoming A Writer 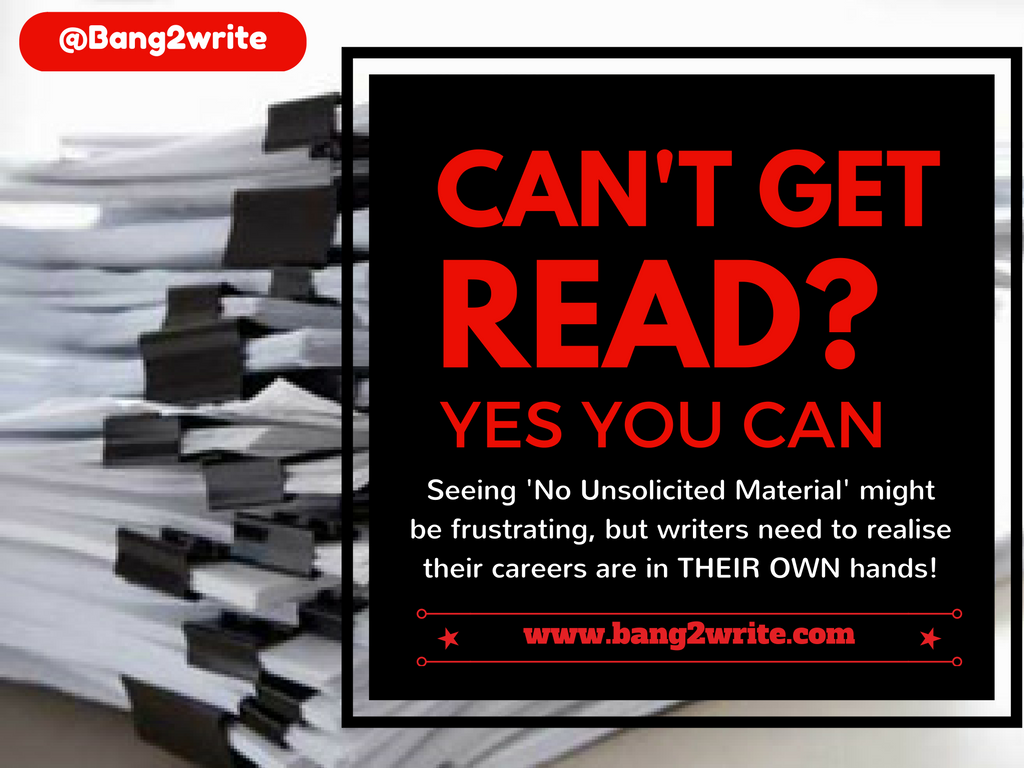 I hear all the time from Bang2writers who say they can’t get read, citing the “no unsolicited material” a lot of prodco and publishing websites carry as the reason. Sometimes these writers will point out some agents will only consider referrals; other times they say independent producers won’t read their work either.

These writers cite their lives as the epitome of *that* old Catch 22 “no work without experience; no experience without any work.”

The answer? GET YOUR WORK SOLICITED! Le duh.

Or, get your project produced without an agent. YES, it can be done! CHECK THIS OUT.

Yes, some agents, producers, publishers and companies will ignore your queries; some may even be rude to you. Some may even request your script, then never get back to you ever again, even if you follow up politely.

This is the nature of writing and submissions; all of this has happened to me and more over the years. It shouldn’t happen but it does.

But you CAN get read and it’s easier than you think. It’s ALL in the strength of your query – I know it sounds glib, but it’s 100% true.

3) You Need Your Own Identity

Now of course the argument is, “Ah, but you have an “identity”, people know about you or Bang2write – AND you have an agent, it’s EASIER for you.”

Yes, having an “identity” and an agent now helps, I’m not going to lie about that. But I’ve been lucky enough to get read from the moment I started sending stuff out, yeeeeears ago, before I had even finished uni and was a completely green writer.

Yes, long before I had an agent or Bang2write even existed.

Long before this blog started.

Long before I even had anything much of worth to offer, including the actual scripts themselves (and they were pretty terrible, LOL). Yes really!!

So I have a stack of rejection letters and printed-out emails dating back to the early noughties, in fact. From agents, producers, production companies, some publishers when I first tried a novel back in 2002 – some of them small, but some of them BIG – some of them had even said “no unsolicited material” on their websites, too. TRUE STORY!

And okay, things are a tad harder now than they were *back then* in terms of getting noticed. The internet is great, but it DOES mean the pond is even more crowded. Someone starting out now has to contend with a WEALTH of knowledgeable peers thanks to all those writing MAs, not to mention people doing all the various courses and events like LondonSWF. Plus all these writing blogs and sites means the spec pile at least LOOKS better than it did in terms of format (if nothing else) than ten years ago.

What’s more, all writers at every stage of their careers have websites, so it’s harder to “stand out”. The list of places with open door policies has shrunk; TV is now the Holy Grail of new screenwriters in particular, when only a short while ago it was all about film and even “art”. Loads of things have changed.

So yes, it’s hard, but it’s NOT IMPOSSIBLE. It’s all in your hands!!

There are some things that NEVER change:

– People ARE looking for good stories/scripts

The most Googled phrase bringing writers to this blog, in fact! So, CHECK THIS OUT.

But next, if you *think* you can’t get read?

Ashley Scott Myers has some really good advice on his blog this week: query everyone, anyway. What’s the worst that can happen? Nothing. What’s the best that happen? They might read your script. Yeeehah! 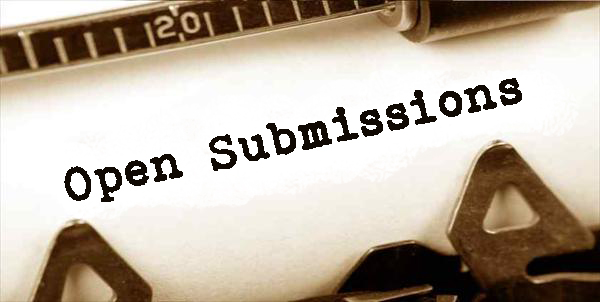 8) You Need to Play The Long Game

I think the more you spaghetti you throw at the wall, the more chance it will have of sticking, so always send multiple queries. Just yesterday, I sent out 12 in one morning. I’ve ended up with four requests for reads, plus two “thanks but no thanks”. That’s a return of half; I’m satisfied with that as a good return.

If you get NO replies or bites, even to a large mail-out, as Ashley says: you need to think carefully about how *strong* your a) query is and/or b) whether the script’s story itself is enough to pique others’ interest.

Forget about this mythical notion of ‘making it’ … All the industry REALLY is? A bunch of people bandying together to write and make stuff. THAT’S IT. But hey, don’t take just MY word for it here, check these out too:

Making It As A Writer: 25 Reasons You Haven’t Yet

Self Belief: Can Do Attitude

In Writing, *This* Is The Tip Of The Iceberg

This is the thing: if you haven’t got a strategy? You got NUTHIN’. You need to decide the following:

Simple,right? Yes … and NO! Here’s some more links to help:

Surefire Writing Strategies For Those Who Think They Can’t Write

Winning or placing highly in a writing competition of some kind is ALWAYS going to help your career and/or get industry pros to notice you. Whether you’re into screenwriting, filmmaking, short stories,publishing or whatever, there is a competition for you!

But there are lots of writing competitions now – literally, hundreds. Whilst winning a BIG contest can be a real step up, just placing in ONE contest is not going to cut the mustard with agents, producers and publishers anymore.

It’s impossible to GUARANTEE a competition win, but there are things that can help your chances. Also, it IS possible to try and ensure you place in LOTS of writing competitions to show industry pros your writing is worth a look. On this basis I recommend determined Bang2writers who want to make a splash in writing contests do the following:

12) A Note On Freelance Writing, Blogging & Self Publishing

Good news: there’s JUST as much great advice – free and paid – on self publishing and freelance writing as screenwriting. And these are ALL great avenues!!!

B2W now offers some advice on all three of these routes, but make sure you follow the links to other experts online:

How Do I Become A Freelance Writer?

How To Do Social Media … And How NOT To!

6 Ways To Find Success As A Writer With Your Blog

There are ALWAYS places a writer is welcome to send their work, unsolicited and it’s just a question of tracking them down. Hayley Mackenzie from Script Angel has THIS LIST for starters. There will be others you can find, too.

It’s all very well discounting places like the BBC Writersroom, but can you afford to? I’ve always had excellent feedback from them in the very least and who knows – it could lead somewhere else in the long term. They offer fantastic schemes, too. Why not give it a shot?

Similarly, try and MEET as many producers as you can, especially in “real life”, but online if you live in the middle of nowhere; don’t discount anyone.

You’d be surprised by how many producers *are* looking for scripts … if you just stopped going after those who will obviously be showered with them! Find producers at the same ‘level’ as you … and this has never been easier. Online, try and connect with as many filmMAKERS as possible. IRL, try to go to:

If you *just can’t* get excited about sending your work off – then don’t. Make it yourself. YES REALLY!!! There are loads of people out there, just itching to collaborate. If short films aren’t your thing, then think about what is, because GET THIS: you can do whatever you want.

So figure out what you want!! And go do it. But check these out, first:

How To Maximise Your Portfolio

“It’s A Catch 22!” How To Get Produced Without An Agent

8 Ways For Screenwriters To Get Collaborating & Making

Get this. In the UK, a first timer is JUST NOT going to get given X million quid to go off and make a film. Hell, the likelihood of this happening in America is remote, too.

Look, I’m not saying it’s all impossible, – far from it – but if you want to IMPROVE YOUR CHANCES RADICALLY then you need to learn about budgets and what is possible. So here’s some good stuff to get you started:

10 Lessons Of Making A Microbudget Movie

So don’t feel downhearted or disempowered; no one wants to keep you out. There’s just LOADS of scripts and stuff doing the rounds and it’s difficult to tell who is in for it the long haul. We ALL have to prove our worth somehow.

Instead of targeting all the *usual* routes or people then, sometimes it’s wise to “move sideways” and think of alternative routes in. We hear a lot about “breaking in”, as if this means having a door opened for you by luck or talent, when really this part – the “SELLING YOURSELF AND YOUR WORK” PART – is about sheer BLOODY-MINDEDNESS … Not to mention that all-important STRATEGY.

Oh and here’s What NOT To Do When Meeting Agents, Producers & Directors, Other Writers.

3 thoughts on “Can’t Get Read? Yes You Can! 16 Top Tips On Becoming A Writer”

previousTick-The-Box vs. Perfect Craft
nextIt’s Not About Luck… And It Totally Is

Miss this, earlier? If you're #writing short stories, then it can be a great idea to check out the advice of renowned writers who've written LOADS of them! Check out their top tips on #Bang2write today ow.ly/g4hZ50BAkAH ... See MoreSee Less

Next up on B2W Trope Week ... The 'Race Against The Clock' is an integral part of thrillers or action adventures (tho it can also appear in other genres). It creates tension & excitement pushing the story forwards & revealing character as our hero strives to defeat the villain. ... See MoreSee Less

#Bang2write Trope Week continues ... How do you stop your story becoming derivative & dull?? Here's 4 Ways Samey Stories Happen, plus 1 Thing You Can Do To Beat Them ow.ly/P0pb50Bw371 ... See MoreSee Less

Samey stories are everywhere in the spec pile. Here's 4 reasons why they happen, plus what you can d...
View on Facebook
·Share

#Bang2write Trope Week continues ... Technology has become such an integral part of the modern world, it has become a trope in #writing ... But it can easily derail your plots & character journeys. Here's how to deal with this necessary part of the story ow.ly/VAhD50Bw2sg ... See MoreSee Less

3 Tech Clichés That Will Kill Your Writing DEAD - Bang2write