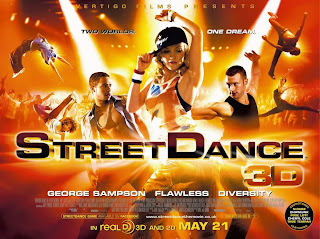 So I watched Streetdance 3D recently. Actually I watched the 2D version, cos 3D gives me migraines, but you catch my drift: I watched *that* UK Dance Movie; the first one ever, apparently.

The US in particular has a rich history of dance movies going back to the age of Fred Astaire and the Goldigger movies, so I’ve always wondered why the UK doesn’t do them. Certainly as a young kid/teenager I watched all of the usual suspects – Dirty Dancing, Fame, Footloose, Strictly Ballroom, Saturday Night Fever, Stayin’ Alive, even Coyote Ugly, Step Up and Save The Last Dance. So did my friends, both male and female – my brother, my sisters, their friends and so it goes on. In short: there’s a big market there. So why has the UK chosen to ignore this phenomenon until now?

Well, it’s easy to point the finger at Streetdance 3D. The acting is mostly abysmal for one; plus there’s more shots of the boyfriend and the lead female in bed together than I deemed strictly necessary (Dirty Dancing it ain’t). There’s nothing here we haven’t *really* seen before either – a culture clash of streetdance and ballet might be “the same, but different”, but in all honesty it’s mostly the same as *the* young woman or man who *learns something about life through dance* just like all the rest of them.

But then that’s the appeal of dance movies: they ARE mostly the same. These are essentially extended pop videos with a bit “extra” thrown in. And that “extra” is what Streetdance 3D does really well:

– London looks FANTASTIC in Streetdance 3D. We’ve seen so many shots of LA, San Francisco, Miami, wherever in this sort of way, but I’m struggling to think of a movie that makes OUR Capital somewhere to be proud of like this. Instead, we’ve been concentrating on making our major conurbations look like miserable places to live, so this was an especially welcome change.

– The script might be let down by some poor acting, but it’s better than you might think. The structure is smooth and allows for extended dance sequences without feeling lumpy or confused or as if you’re waiting for the next one to start. Characters are differentiated enough to be interesting, but not so much it’s a mad melee of faces and names too (no mean feat when you consider just how MANY dancers are in Streetdance 3D, never mind the supporting cast of dance teachers and examiners).

– Breaking the rules and challenging tradition is placed at the heart of this narrative and is never better than when everyone at the Streetdance competition at the end actually BOO *our* dancers, but they (inevitably) turn it around. Throughout the whole piece, there is the notion that “as long as you work hard and are honest and decent, you get your reward”. This is highlighted by the traitor Jay, the original leader of the crew, who defects to champion group The Surge, doing his friend and girlfriend over to be in with a chance of winning. Which of course he doesn’t, so he gets what HE deserves.

– Streetdance 3D never once forgets who its audience is. Young people watch hours and hours of MTV; they love dancing and they love storytelling – but as I’ve said before on this blog, simplicity is key in the pop video, thus it must be here as well to allow for those extended dance sequences. But simplicity does not mean “dumbed down”: not once does Streetdance 3D treat its core audience like idiots and even provides a fantastic reversal at the mid point dance battle when it reveals Jay as a traitor.

– The choreography is truly jaw-droppingly good in every single scene dancing appears, I didn’t see one bad or cheesy move. Don’t believe me? Check out the links below. And what is the name of this movie again?? 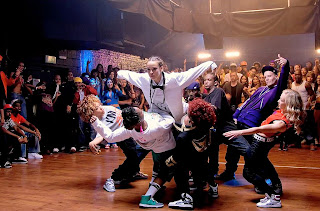 Lots of writers get very het up about COMMERCIAL films – it’s almost a dirty word these days, it seems to me. But why? Streetdance 3D is exactly the type of movie young people WANT to watch – and why not? It has a healthy message, looks fantastic and appeals. We spend a lot of time talking down our youth in this country and it seems to me the more movies we can give them where us *old* people say, “You know what? You lot aren’t half bad at all; you can do what you want, so go for it”, the better. I would have LOVED to have seen a movie like this when I was younger – instead I had to make do with movies where people thousands of miles away filled in for my UK contemporaries. There’s nothing wrong with American movies of course, but Media Imperialism casts such a vast shadow over young people’s lives in this country, is it any wonder they flocked in droves to see Streetdance 3D and groups like Diversity and Flawless THEY had voted in on shows like Britain’s Got Talent?