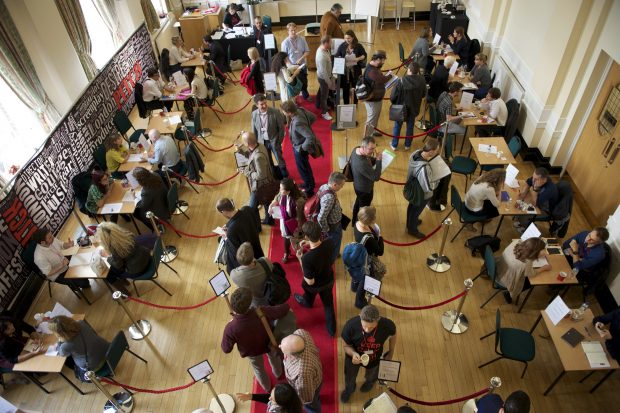 Pitching … Love it or hate it, it needs to be done if you’re going to sell your work. Sometimes this will be on paper via one pagers and treatments; other times it will be in a formal pitching environment like the Pitchfest at London Screenwriters Festival, or for virtual opportunities.


With the festival on everyone’s radar, here are my top tips for those planning on pitching face-to-face, whether that’s across a desk or via a Zoom screen …

1) Know your logline inside out

Knowing the central concept yourself and relaying it as clearly as possible is an absolute must, don’t make the person you’re pitching to have to guess. What’s more, you can relay your logline as formally or informally as you like, it really doesn’t matter; no one is ever going to jump on you for being prepared, so if you have to read out your logline ‘cos of nerves, where’s the harm? Remember though: a logline is not a tagline.

2. Don’t forget to tell your pitchee what your project IS

Really obvious here, but I often finding myself asking things like, “Is it for television or film?” Occasionally people will say, “Both”, but I think that’s a bit of a cop out as knowing exactly *what* your project is gives us clues about its identity, which remember is not to be underrated.

From here, you might get asked a bit about the project’s genre or its audience – so if it’s for TV, what sort of slot are we looking at? Is it a returning drama, continuing drama or serial? If it’s a film, what kind of certificate do you envisage and why? Who is your audience? What types of things have they watched before? Why would they like your project?

The is when you say, ‘BUT I’ve heard people don’t like hearing stuff like “JAWS MEETS PITCH BLACK”‘. This might be true, though to be honest I don’t think I’ve knowingly met people who absolutely hate using this device. That said, simply sticking two movies/shows together does not necessarily “inform” us what your movie/show is “like”; who its audience is or why they might like your project.

With the above in mind, I would be more inclined to say something like, “The audience who might like this movie are the types who may have watched the likes of [two or three similar movies], are in this [age range] and may have read books like [1 or 2 books]”, plus any other useful demographical information that can illustrate the interests of this audience – ie. you have done your research.

I think this depends on the context. Don’t ever press scripts or USBs into the hands of others, unsolicited. If a speed pitching session, I don’t see anything wrong with giving your pitchee a one pager, though I think it’s polite to ask first.

If you’re doing a more formal pitch and have been told you can bring props, one pagers, mood boards or powerpoint, then ALWAYS DO SO, because such things can make you less self conscious and thus feed into helping your confidence and focus; they also help others to “visualise” your project better. But keep it as simple as possible and don’t overload people. Oh – and if in doubt, ask what you can bring.

4. Don’t get caught up in the plot

Instead of going for the smaller details then, give us a “sense” of the WHOLE. Lots of pitching people recommend “selling the sizzle, not the steak” – and this is what they mean by this: logline, characters, goals, genre, audience, *that* type of stuff, not the ins and outs of the plot. MORE: 8 Tips For Perfect Pitches & Super Selling Documents

It’s very easy to get het up when pitching and unexpected things *do* happen; once at a pitching event I shook someone’s hand as I was sitting down, missed my chair, fell to the floor AND pulled them over the table so the (rather rickety!) table collapsed. It was very, very embarrassing. But hey, the producer in question will always remember me!!!

But hopefully this kind of calamity will not befall you and all you’ll get is a case of chronic nerves. If this happens, don’t panic. If your mind goes blank or you start stuttering or whatever, just be truthful and say you need a moment to compose yourself. No one’s going to think any the less of you.

Model Pitch For You

For anyone who wants it, here is the model pitch I often provide for those who ask me:

Hi, I’m [name, a little bit of relevant b.g – one/two sentences max]. I’m here today to pitch a [genre of project/title of project], it’s a [TV script/Film script/web series/whatever]. The logine is [logline] and it’s aimed at [audience + why].

Obviously depending on the context/time you have (and whether you have props or other people with you), you can expand or reduce it to fit. I think it encapsulates those burning questions a pitchee *might* have about your project, which means in the questions/feedback part you can talk in more detail about the project, rather than chase after any important, yet missing elements you didn’t cover in the first instance. MORE: Logline Hacks To Help You Pitch