Guest Post: Conversations With My Idea by Alison Bond

Novelist and screenwriter Alison Bond shares with us her wrangles with writing… Enjoy!
————————————— 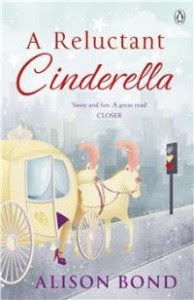 I wrote my first book. It got published. Five stars in Heat Magazine and the tabs and some rather sexy posters on the London Underground. It sold nothing. If forty five thousand copies is nothing. Which apparently it is. I wrote another book, in fact I wrote two. More good reviews, blah blah blah. And now it is time to think about the next story. Luckily I have an idea that speaks to me.

I start writing it as usual and then I stop, then I start again and this pattern continues for a couple of years. I am forced to shelve this particular story and write a different one in order to meet my deadline, but the tricky little story still feels like a book I want to write. So I pick it up again.

Now, I not a total screenplay virgin. I’ve got some form. I went to university for three enlightening, drunken, humbling years to learn how to write screenplays and I wrote one there. I remember being miffed when it scraped a 2:1. It was awful. I read it back now and I am mortified. Between books I wrote another, for money, for real. An Oscar nominated actress was attached for the lead. The film never got made. That script has many flaws. It’s obvious, a bit studio, which a non-studio film should never be. The structure is sound, the comedy is funny, but it doesn’t push.

When I think about my new story I think of visuals and not crafty sentences, I see Kristin and Caine and Emily Blunt (and I don’t even really like Emily Blunt so that’s weird), I hear my dialogue, I see my inciting incident not my prologue, my stakes not my chapter breaks, my turning points instead of plot twists, rotating on action and existing on revelation. All these story habits which are instinctively useful to the prose writer but essential to the screenwriter. And I am scared.

GET A MOVE ON.

It has been five years since I wrote my last screenplay, and five years since I wrote the one before that. I have forgotten what I supposed to do. Am I really supposed to write my outline and my treatment and my scene by scene? Can I not just start writing and see where I end up a year later? How do I get my point across without writing it down? How do I squeeze six characters into ninety pages – do I give them fifteen pages each? With all that essential white on the page? My last book came in at 119,000 words. Final Draft doesn’t have a wordcount feature. What? No word count? So how will I know that I am done? Maybe I’ll just write it as a book.

I AM THE BEST IDEA FOR A FILM YOU WILL EVER HAVE.

Previously a literary agent with Casarotto and alumni of Bournemouth Media School where she currently lectures on its MA Screenwriting,Alison Bond is the author of three novels so far: Almost Famous, The Truth About Ruby Valentine and A Reluctant Cinderella. Follow her on Twitter here.

3 thoughts on “Guest Post: Conversations With My Idea by Alison Bond”

previousWriting Epiphany
nextGuest Post: What Will The Scary Script Editor Ask Me? by Pippa Best