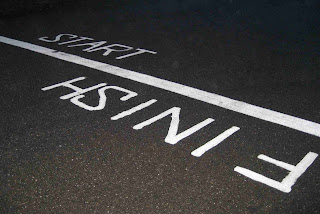 There are many reasons writers don’t get ahead.

Sometimes it’s because their script or story is duff in some way (story clarity, character and/or structure are the favourites); other times it’s because they can’t actually write. Sometimes writers just can’t seem to catch a break (even when they deserve one); other writers refuse to network or do it badly and miss the boat. At the other final end of the scale, it’s even more simple: said writer is an arsehole and no one wants to work with him/her.

That list seems pretty all-encompassing, right? As long as you try and avoid the above as best you can, you’ll be FINE… Yeah?

… Because writers can be their OWN WORST ENEMIES. Forget script readers: even the most demanding of notes we give you are akin to your Mum nagging you to leave the loo seat down — and would it kill you to open the damn curtains!!!

Too many writers don’t get ahead because they default, just before the finish line. Perhaps it’s a lack of self esteem, some kind of attachment disorder or perhaps they really are blind to the fact they are SO CLOSE TO THE END? Whatever the case, the fact these writers don’t go that final hundred metres means they end up ultimately sending out SUB PAR WORK. In a nutshell: their scripts are not the best they can possibly be. And we *all* know what that means: a return envelope. A “thanks but no thanks” email. A list of competition names with their own omitted.

We hear a lot about the writers who hate getting any kind of notes, but not enough about the writers who love notes so much, they become some kind of frenzied rewrite junkie. So focused are they on what they call the “bigger picture” — usually structure and character — that when a reader recommends looking at pace and dialogue in order to POLISH the draft, they stare at you, slack-jawed as if you are an escaped loon. Instead, when they get notes that don’t say stuff like “go back to page one”, “revisit Act 1 again” or “remould the characterisation”, they are COMPLETELY FOXED. Instead they might insist they CAN’T possibly be near: producers and agents have read this script, they didn’t like it! This means we HAVE to change a large amount of the script to even be VAGUELY with a chance of getting noticed! (I’ve heard it all now).

Yet whoever said polishing a draft was easy? If it was, everyone would do it — and yet so few writers actually understand what it means or WHEN to do it – and even when they’re advised to do it, they’ll reject it!

However, when you’ve read plenty of scripts, you’ll see there are two elements that are synonymous with draft polishing: dialogue and pace.

As I’ve said before, dialogue is the least of a script’s problems, so it frequently pops up “last minute”. There’s always too much dialogue in spec scripts anyway, so a writer can often find they can lose between five and ten pages in readying a script for market. What’s more, a writer needs all of his/her dialogue to not only be *good*, but clever; a little subtext never goes awry. There are other dialogue problems and tricks a writer can identify and master too — if you don’t know what they are, then your script isn’t ready for market. Go and find out now.

As for pace, this is harder to pin down — but a lot depends on the genre. Even high octane action/adventures have lulls before the storm. Of course, this is what readers like me are for: I never just say, “polish your draft” in notes, that would be ridiculous. I put the script right under the microscope – and say what I think needs polishing and why, with suggestions the writer might want/need to consider. It’s really important to remember pace is not just about being FAST: good pace takes in peaks and troughs and makes the story even better. But scenes – in any genre – can ALWAYS be faster. If you work on that basis, you really can’t go far wrong.

It’s not enough for your story to *just* MAKE SENSE — it’s definitely an achievement, but it’s not really that unusual. What’s more, we know readers are looking for any reason not to engage — if you think about it, what you rather do: read a script or finish early and go for a pint? But it’s as if those rewrite junkies cannot compute with these more specific notes that could help them do this. Instead, they can’t “let go” of their beloved “bigger picture”. They really would rather go back to page one than consider their stories are fine, they just need to “punch up” and “polish” their draft and make it SHINE. This of course is madness, as they’ll willingly rewind their progress BACKWARDS and then send out a draft that could be hit or miss (and is most likely a “miss”).

The last hundred metres in writing your draft is making sure you can communicate your story, to the reader, in a fast-paced and polished way. So… what’s your script like? Have YOU gone the final hundred metres?
—————————————-
MORE: If you want to know more about the spec pile, how screen agencies work, what a writer’s “voice” is and how reading scripts can make you a BETTER WRITER, then come to my course at Ealing Studios on April 24th, 2010. Just a few places left!