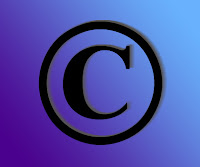 Copyright is something that comes round and round again – message boards, forums and postings here, there and everywhere seem to *always* say something *like*:

I’m about to send my script off to a producer. How do I protect it?

Seems to me copyright only appears important to writers not used to sending out their scripts; it can be a daunting prospect and part of the fear of that unknown is how *safe* our work is in the hands of these anonymous producers and agents. I’ve never once had a conversation with a seasoned writer that goes like this:

WRITER: Various… Had to copyright it first though, don’t want anyone stealing it!

The fact is, no one is out to nick your script. I can’t stress this enough. A prodco or agent can work with you on developing your script (if it’s good enough) or they can move on to try and find a better script and/or writer. Do they really want to add a third option to that – nick the script and produce it *as is*: what’s the likelihood of that, anyway? No script is produced *as is* anyway. Even the best spec script in the world will need development to make it production-ready.

So here are my top 5 copyright myths exploded:

5. America insists on copyright, so the UK must too. America certainly seems more *into* copyright than the UK; often a scribe will be asked to sign a release form AS WELL AS provide evidence of copyright (and I have done both and never had my script nicked). I have also posted scripts on Inktip, so I had to copyright them and for this I used the very comprehensive service Duly Noted. But sites like Inktip don’t want to get stuck in the middle of any potential [bogus] copyright ruckus between any two parties, so it’s very wise of them I think to have this stipulation. In comparison then, have I ever been asked to sign a release form or been asked to provide evidence of copyright here in the UK? Nope. Not once. Have I ever had my script nicked? Nope. BTW, if someone tells you it HAS to be WGA registered to get read in the USA, in my experience that’s not true; though individual companies might insist on it, I’ve had plenty of reads by various American companies and never used the WGA.

4. Copyrighting my script makes me look professional. Not in the UK it doesn’t; it makes you look paranoid: in fact, sometimes that (c) on the front of your script can even act as a BARRIER to you getting read! As Adrian Mead wisely says at most of his seminars, plastering the (c) sign all over the front of your script makes you look like a nutter to readers. Why? Because no one is going to nick your script. End of. So by putting the (c) on, you’re actually showing your inexperience as a writer and potentially putting readers at prodcos, agencies, etc OFF.

3. Writing my idea down means I have the copyright. Yes, the written form of your idea is copyrighted. Not in its “broad” form, like  “boy meets girl, boy loses girl, boy find her again”, but a few specific paras or pages is copyright. So if someone copies your idea by copying the details as you wrote them, it will probably be an infringement; the idea can be protected by your rendition of it. In other words then, your actual screenplay or novel is copyrighted by the fact YOU wrote it; but you cannot copyright the idea behind it in its “broad” form  – and thank F for that, else we’d have only one werewolf or vampire movie; one time travel or alien idea; one “fish out of water” comedy; one “coming of age” drama and so it goes on. Because it’s not possible to copyright those broad concepts, this means writers are FREE to write about whatever they want: THIS IS ACTUALLY A GOOD THING.

2. NDAs (non disclosure agreements) are the same as release forms. Sometimes I am asked to sign an NDA by a production company or initiative when I read or script edit for them. This is not because they are afraidI will STEAL the script, but because they want to protect their investment on the basis a single loose-tongued reader could give a rival company the heads-up on what said prodco is doing to a *certain* project which they may be keeping secret for a *specific reason*. When there is such a lot of money involved – even a “low budget” pic could be two or three hundred thousand pounds in the making – this can be a good idea. Note this only happens when there is [very almost] a deal in place – talent attached, budgets drawn up, that sort of thing. NDAs have no place with specs simply doing the rounds; they are not the same as release forms. Besides which, it’s the WRITER who signs release forms (a kind of “permission to read” if you will), whereas READERS sign NDAs.

1. Your script is in jeopardy of being stolen every time you send it out. It’s really not. I’ve been a script reader for donkey’s years now and have never once heard a CREDIBLE case of it happening. However, as I always say to clients: if copyrighting the script makes YOU feel better, then why not? It has to all intents and purposes done its job – just don’t plaster that (c) on the front page!

YUP ✅️"Success comes those who don't realise failure is inevitable." (Coco Chanel) "Start now. The conditions are nearly always impossible." (Doris Lessing) ‘Just remember, you can do anything you set your mind to, but it takes action, perseverance, and facing your fears.’ (Gillian Anderson) For more inspiring quotes to keep you going as a writer 👇👇👇bang2write.com/2021/01/top-10-quotes-to-keep-going-as-a-writer.htmlDavid L. Williams:I know many writers are disappointed with their results from contest announcement season. As someone who just had one helluva day with emotions all over the spectrum, I can't stress enough that, all that matters, is that you keep on. Write write write write write and believe. ... See MoreSee Less