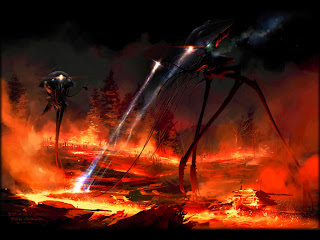 War of the Worlds by HG Wells was one of my favourite books as a child. Like many popular novels, there have been many, many adaptations of it – stretching across the mediums, too. With this in mind then, I’m going to take a look at a book which captured the imagination of the public, starting incredibly before space travel was even possible. Enjoy…

War of the Worlds, pt 1 – the beginning of Orson Welles’ infamous 1938 radio broadcast which had people literally running for the hills! [More parts available via Youtube]

I first listened to this broadcast as part of a media studies A Level project. I’d heard people really had thought the martians were arriving when they heard it back in 1938, but couldn’t really relate; like most teenagers, my POV was the *only one* that did or could exist. However this proved a real eye opener: I suddenly realised that people in what I called “the olden days” were at the mercy of their media, quite literally – there wasn’t the same opportunity to cross reference, there was the BBC or bust and if they said the aliens were coming, THE ALIENS WERE COMING. Still a really well put-together broadcast I think, if you haven’t been able to listen to it, do.

War of The Worlds – straight story Reading by Orson Welles & Richard Burton from SpokenVerse – quite a thrill to hear Orson Welles actually reading the text, even if he does sound a little bored!

I don’t know when this was recorded, presumably after the 1938 broadcast. I’d never heard it before the weekend – perhaps it was before Jeff Wayne’s War of the Worlds (below), prompting him to hire Richard Burton? Pure speculation on my part, though.

War of the Worlds – 1953 version trailer

I saw this movie when my friend Helen brought it from a car boot sale on video for 20p and we watched it together. I hadn’t left primary school, so I suppose I was about ten. It’s quite faithful to the book, though the location changes from London to California and the protagonist is a physicist instead of a journalist; what’s more his girlfriend, whom in the book he famously sees setting off on the boat without him, is a woman, Sylvia, he actually meets at the crash site instead. Overall I was satisfied by the adaptation as a child and found parts of it quite scary; however, due to the incredible leaps forward in technology in the last twenty years – particulary CGI – the monsters, space ship, etc now look quite dated. Despite this however, the actual storytelling still works for me.

Perhaps one of the mnost interesting adaptations, due to the fact one doesn’t always see books reimagined as a prog rock offering. I was lucky enough to see Jeff Wayne and his orchestra perform this at the Bournemouth International Centre last year, having listened to the recording numerous times during my childhood and teens. Jeff Wayne takes a very “traditional” look at War of the Worlds, restoring the unnamed journalist and even the priest who attempts to drive back the creatures with the power of God. Whilst not fantastic music by any stretch of the imagination (not to mention horribly repetitive at times), Wayne does I think capture the drama of the novel with a combination of music, F/X and media, the icing on the cake being *that* Richard Burton narration – restored for the noughties by using an actor’s moving lips over Burton’s own holograph face which seems to “loom” over the proceedings for the audience. The youtube clip is a fan vid of one of my favourite parts of the whole proceedings, “Thunderchild” (from about 5 mins in, after “Forever Autumn”), which has the so-called “Voice of Humanity” describing the boat outrunning the machines, taking the Journalist’s girlfriend away from him, but at least to safety; this is one of my favourite parts of the whole book, so I was thrilled to see the original artiste from the recording at the BIC, Chris Thompson, singing this. (Apparently there is a computer game too, though I’ve never seen/played it).

Spielberg’s War of the Worlds Trailer – with French subtitles, this blog IS international you know

I didn’t bother going to see Spielberg’s “War of the Worlds” at the cinema; I mistakenly believed it would be just *another* retelling of the Journalist’s journey. I ended up watching it when I’d just had Wee Girl – and couldn’t believe the liberties taken with the source material; Josh Friedman and Spielberg must have had nerves of steel to mess with such a classic. But I for one really thought it paid off. The goal completely changes; instead of the Journalist merely trying to survive whilst documenting the apocalypse, Tom Cruise’s absent father must take his children to his Ex in Boston, by hook or by crook. This neatly side steps the whole Deus Ex Machina of the aliens being defeated by the cold virus and introduces a whole set of new problems for the characters involved, most of which really worked – especially when Tom Cruise is forced to choose between his children on the hill. The real jewel in the crown though has to be the adaptation of the priest to the Apocalypto who threatens Cruise and his daughter’s survival in the cellar by being completely nuts and trying to take on the creatures, whom Cruise is forced to kill to protect his child.

And finally, just for fun:

War of The Worlds in 30 seconds – with bunnies. SYLVIA!

5 thoughts on “Adaptation Case Study: War of the Worlds”