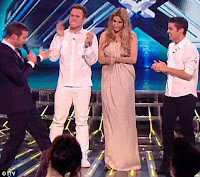 I’m always confused by the amount of scorn and vitriol poured on shows like The X Factor. If you don’t like them, that’s fair enough – but to suggest people who do have special needs – as someone accused me on Twitter last night in fact – is not only laughable, non-PC and juvenile, it’s plain ridiculous. If you think about it, it’s quite obvious why such a show would appeal to me:

Here, painted in glorious technicolor, is a show which epitomises the struggle we go through every day in our bids to get discovered as writers. We’re treated, first hand, to the fickleness of the public in choosing which they believe is *best*. Can’t we learn from this? Let’s take a look.

No matter who has the best voice, it’s a popularity contest: who do we LIKE? This year, we loved to hate Jedward. We didn’t like Danyl; we loved Olly, but it was Joe as the boy next door who is “the most talented”. We saw a return to the bad old days pre-Leona and Alexandra in which women were sidelined as having little talent and/or likability and the likes of Stacey, a girl who could barely string a sentence together, was celebrated. Instead Rachel was one of the first to go – her boyish haircut blamed (WTF?) and Lucie lost out to the machine that was Louis who is so good at marketing, singing ability doesn’t even get a look in, even to the chagrin of Dannii who kept whining “This is a singing contest” (Er no, it isn’t: it’s called X FACTOR).

Joe might have won the contest, but as always it was the runner up who really shone: it’s Olly who is the performer, just as Rhydian was to Leon or Ray to Leona. Joe might have a fabulous voice, but he is a musical star and will do well on the West End where the majority of X Factor & Pop Idol stars seem to end up (I’m looking at you Ray, Brenda and Darius). Olly is like Robbie with a voice and the lack of addiction to painkillers and tattoos: if he keeps the fire in his belly – unlike Robbie! – he could have the kind of career in which he matures and changes, like the first of his kind Will Young, who I never liked in Pop Idol yet have found I have liked almost all his singles – grudgingly – over the years so much I bought his Best Of recently.

It’s hard sometimes as writers to believe in ourselves: most of us won’t win a major contest or get funding. That’s just the way it is: there are too many of us and too few places – JUST LIKE SINGERS AND X FACTOR. Imagine all the good singers that were deemed *not right* for X Factor at all. Are they ALL those jokers in costumes or the tone deaf weirdos with odd song choices? Of course not. Thousands and thousands and thousands of people auditioned: SOME of them HAD to be good. But Simon and his posse have a particular vision in mind and those singers had to fit in with it.

But sometimes we WILL fit in with someone’s vision.

And sometimes we will be runners up.

And sometimes we will be better than the winner and outlast them.

But you can’t do that if you quit.

previousSales Agents: Just The Way It Is
nextRemember To Remember