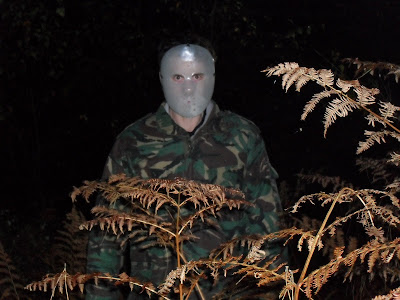 Whoa. Think I may have died somewhere in the last 36 hours and no one has bothered to inform my body as I type this, Zombie-like. Had hoped for a 2am or 3am end to the shoot this morning – we actually left the site at 7am. Basically, the Halloween SPIRITS FROM SATAN cobbled us, again and again: I’ve never known such a plethora of bad luck in such a short space of time:

1) A broken generator culminating in a mad dash back to my house on the off-chance one of our neighbours had one – WHICH HE DID. (God Bless ya, Tony)

5) FIREWORKS!!! Yes that’s right – November the 5th is fireworks night EVERYWHERE ELSE IN THE KNOWN UNIVERSE (or at least the UK), but not in The New Forest apparently

But hey ho, these things are sent to try us and we’re not dead yet (allegedly). It certainly means I learnt about two years’ worth of producer stuff in just a few hours ‘cos NO WAY I am ever gonna let that sorta thing happen ever again (though having said that, I’ll prevent all that and something else will EXPLODE UP instead, like a rat out a drainpipe — did *anyone* tell me filmmaking was like this?? Oh they did?! DAMMIT).

Many thanks to an awesome team who took it all in their stride: our two actors Lucy Laing and David Black; DoP David Beaumont; stunt coordinator Elaine Ford; runners Eve and David (seen above stepping in as the serial killer); sound guy Udit (You were brought on to the project so last minute I never found out your second name!); makeup artist Jessica Stonechild and of course the director Schuman. Hats off to ya.

Want to view photos of the location and the shoot? Here you go.