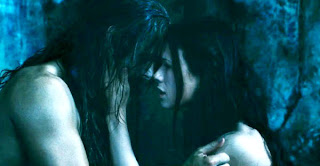 We all have movies we’re slightly ashamed to admit we love, particularly if we’re screenwriters. Those movies might be unoriginal, hammy, badly executed with plenty of WTF? moments. Yet inexplicably these movies speak to us: we love them, watch them over and over again. We just can’t help ourselves. I don’t think there’s a single person in the world who doesn’t have at least one embarrassing DVD on their shelf.

For me, it’s Underworld: Rise of The Lycans. The first movie was awful and the second even more so, but this one is great fun. I think it’s because the *only* good thing about the first movie was werewolf king Lucien (Michael Sheen – he’s “present” in Underworld 2, but only in flashback and only snippets from the first film, yuk!), so a whole movie devoted to him really floats my boat. Besides, I am actually in love with Michael Sheen, he’s awesome: he could do anything, seriously, and I’d watch it. The fact then he spends most of THIS movie in near-states of undress or actually nude is a mega bonus, not least because I spend a lot of time stalking him on Twitter, the only celebrity I actually do (Hi Michael, run away with me, Kthxbye).

There’s something delightfully Shakespearean about Rise of The Lycans: the vampire council sit every five minutes it seems and I was left in no doubt that if the Bard had written plays with vampires in, his scenes would not be unlike those, albeit perhaps a little more ironic and clever. OK, let’s not forget *that* bit where Lucien watches his pregnant vampire girlfriend die AND THEN changes (WTF?? Oh he had a silver bullet in his shoulder… But this doesn’t stop him AFTER she’s dead??), but apart from that, it rolls along pretty smoothly, if predictably. Especially cos we’ve seen this story before… They actually tell the entire thing in flashback throughout the first movie. But hey! We get to see all the bits in-between and Bill Nighy gets to ham it RIGHT up and stalk about with a super-sour face on him, check this out: 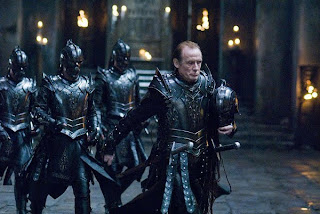 Rhona Mitra’s in it playing herself of course as usual, but she actually fits in this movie. Steven Mackintosh makes a reappearance too and like the first movie, doesn’t *really* do anything, but he riffs well with Nighy and there’s that bloke from the first film who looks and sounds a bit like Ving Rhames, always a pleasure. (BTW, funny story: my son’s father’s girlfriend’s MOTHER used to go out with Bill Nighy. Think I got that right… Small world).

So… yeah. I loved this movie: whilst my hatred of vampires is legendary, I love my werewolves, so this balances out nicely putting a werewolf in the protagonist’s, instead of the antagonist’s role (like the first movie). Some reviewers were very rude about the CGI here, but I thought it was fine: the running werewolves were good I thought and there’s that great scene where the big spear things crash through the windows as the werewolf guys and Lucien were trying to escape the castle…. Though I am pretty sure they nicked the prison set straight out of Alien 3 and put the werewolves in it, but hey can’t have everything.

So what’s your guilty pleasure movie-wise? Don’t pretend you don’t have one, I KNOW you do….