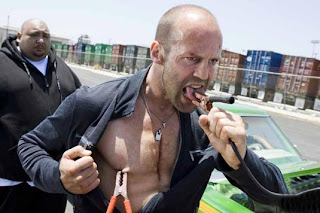 This is a message to all who have brains in the audience (and presumably hearts in their chests?): please, for the love of all that is holy, (whether that’s God, chocolate or Dr Who to you) don’t watch Crank 2: High Voltage. I have gone through that pain for you. And I can’t tell you it ain’t good pain.

For the record, I enjoyed Crank. I’m not Mary Whitehouse, I can dig films that are both ridiculous and non-PC. Plus the sight of Jason Statham with no shirt on is always going to appeal. Whilst Crank sailed close to the wind for pretty much the whole film, it had enough cheeky bravado to get away with it, even *that* sex scene in the middle of the street.

And there are moments to Crank 2 which recall its predecessor’s, shall we say joi de vivre,? *Ahem*: Geri Halliwell makes a memorable cameo (yes, Geri Halliwell!), there’s a momentary nod to Power Rangers just before the resolution (yes, Power Rangers!) and Statham himself is in fine piss-taking form. You can see in his eyes: SHOW ME THE MONEY. And why the hell not? Only a mentalist and/or saturday night drunkard like me is going to watch a film about a guy with a robotic heart having to “charge” himself up with any available electricity to get a bunch of Triad gangsters who a) stole his heart to stick it in their Don and b) “killed” him in the first movie with a slow-acting poison that lead to him having to do essentially the same thing then too. As the newsreader says at the beginning of THIS film: “One word: IMPLAUSIBLE.” Well, yes it is. Crank 2: High Voltage was always going to be WTF? But sadly it was WTF? for all the reasons Crank wasn’t. 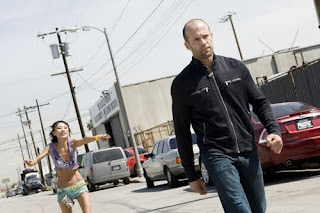 So what was the problem? Well, the age-old issue of misogyny rears its ugly head (ahem) for pretty much the whole movie as far as I was concerned. If it was the non-stop close-up beaver shots, I could just about live with that – what else is new? – but it was the complete lack of female characters in general that really grated me. In seemingly every scene, there are naked and semi-clad women, some even toting guns like out of a schoolboy’s wet dream. Out of the blue, Amy Smart, hardly a diplomat for female equality at the best of times (and present also in another offending WTF? movie in this series, Mirrors), has now become a blow up doll with tape over her nipples. Suddenly I find myself yearning for her character in Crank, for next to this incarnation she seems like Einstein. Surely that’s it…

…No it isn’t: lots of the women in this movie are lesbians. Who can’t control themselves, obv. Oh, and porn stars: they can’t control themselves either. In fact, as this dirge continues, the movie starts to speak to me: women in general? They’re all a bunch of hos, man, they’re asking for it. Let’s fuck them all. And when we’re done, let’s blow holes in them with our big guns and watch their tits explode in a mess of blood and silicone. YEAH. Especially that annoying Chinese bitch: Statham even says “What are you talking, Cuntonese?” Smooth. And because she’s so annoying, she needs to be dispatched WITH FIRE. Even though she just played her part in saving his life. How’s that for gratitude?

If I really want to break it down (and I’m losing interest now), most of the men don’t fare that well either – except Statham and his mate who handily happens to be a heart surgeon. They can be amusing and cool and funny (when they’re not abusing women or making racist or homophobic comments, natch). But Latino, Black, Chinese? The stereotypes are drawn with abandon. And it depresses the hell outta me. So much for “comedy”.

So that’s what I think. What about you?