Guest Post: Once Upon A Time… Children’s Stories By Katie McCullough 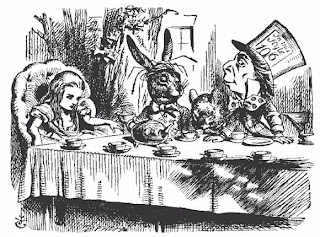 After being commissioned to adapt an open air production of “Alice in Wonderland” it got me thinking about the power of children’s stories. We’re all born natural storytellers. We know when something is a beginning, a middle and an end and we can also tell stories as we reinvent, elaborate and regale to parents, friends and colleagues. But what keeps the appeal especially when we grow up?

The flux of cinematic children’s stories such as the upcoming “Alice in Wonderland”, “Fantastic Mr Fox” and “Where The Wild Things Are” just reiterate the excitement for all ages a child’s tale can bring. By re-envisioning a children’s story we’re allowed to re-live and momentarily forget our ‘adult’ eyes and revel in the playful children’s vision. Films such as this do well because of the visual attachment that’s been fine-tuned and elaborated on via directors, producers and designers. The distant battle cry of many a writer would be, “the book is much better than the film” and one of the possible reasons for this is because we create our own appearance to what we’re reading, we have our own cast and our imagination feeds what we need to see. But after overlooking all of this when an extension of a child’s vision is imprinted on the cinema screen it truly is an emotional experience whether it be for an adult or a child.

Magical realism will always feature within the genre which suits children’s film because of the nature of a child’s imagination. Its sits well and encapsulates the excitement and thrill of a young mind. But it’s not all fairytales and wizards; if you look to any modern Disney or Pixar film you’ll see it’s littered with jokes meant for the adult presence, because someone has to take the child to the cinema in the first place. But saying that children should be given more credit than they are; they’re constantly learning and adapting to their environments and can pick up on the subtlest of themes within film and television. It’s a grand adventure for them that begins before they’ve even shut the front door. When they step into a film we’re asking them to take us by the hand on a journey and distract them for a few hours. For a child it can last a wonderful, colourful and exciting lifetime that goes further than the closing credits.

Children’s literature contains stories that stick with us collectively as we grow up. But the market is constantly changing and new stories are being told so to breathe life into long-standing classics it often takes someone else’s fresh approach to really bring it alive; it can lie already told and dormant in the mind but deserves to be given a new lease of life. A storyteller’s work is never done even after the last page and especially when the audience want to hear more.
____________________________________________________

Katie McCullough is a screenwriter and playwright whose tools of choice are her hands and anything to write with (as well as her mouth to talk to people). She’s a graduate of Bournemouth Media School and The Royal Court, London, and has had several readings at the ICA and Theatre Royal, Stratford East as well as several stories published on Six Sentences and Metazen. She’d be happy to ramble at you given half the chance as long as you let her look for a Gin and Tonic. Visit Katie’s website here.
___________________________________________________

NOTE FROM LUCY: Thanks Katie! Be sure to check out those links… Every writer should be making the most of the great opportunities sites like Six Sentences and Metazen provide. The internet has no shortage of sites like this, there is NO EXCUSE not to get published! In short: write it and send it, people! What’s the worst that can happen?

previousWhat They *Really* Mean About Your Film…
nextGuest Post: Characters On The Couch: Psychiatry & Screenwriting by Stephen Potts