All Aboard: The Night Train 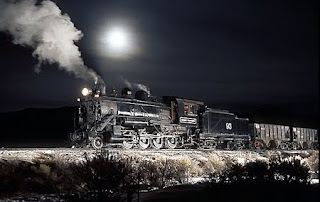 So I was in London yesterday and made the really stupid mistake of wearing 5 inch heels when I knew full well I was going to be walking EVERYWHERE. But even that wasn’t the extent of madness that ensued, even though I did fall off them in Oxford Street and stumbled right into the arms of a rather gorgeous Eastern European on the phone (it’s true, I didn’t do it on purpose… Honest!!!).

Fast forward all the meetings – they went well, thanks and THIS time I managed not to poke Julian Friedmann’s eye out with a chopstick – and to the evening, where I had a few drinks with the fabulous Bride of Christ Elinor and generally put the world to rights, as laydeez are wont to do. We were *supposed* to meet the ill-time-keeping Jared too, so I told him 5 knowing he should be there around seven… Only seven comes and goes and he’s still not there. He’s texting and calling though, saying he’ll be there *any minute*, JUST STAY RIGHT THERE. So we wait a bit and wait a bit more, but 9 o’clock comes and goes and I say to Elinor: Sod it, let’s go.

So we do and Elinor trots off into the bright lights and I get a phone call LITERALLY AROUND THE CORNER from the pub that goes like this:

JARED: Where are you? I’m HERE

JARED: You can’t, I’m here! I’m RIGHT OUTSIDE THE PUB

By this point I’ve walked back towards the pub.

JARED: I bloody am! I’m locking up my bike. Be with you in ONE SECOND.

So I go back into pub, order us both a pint…. No Jared. Phone rings:

JARED: Where the hell are you?

JARED: I’m walking up and down the pub, you’re not here.

I look around – place is deserted but for a few drunken teens in the corner showing each other nudey pics on mobiles and guffawing. Has Jared slipped into a parallel dimension. OH MY GOD.

JARED: Hang on… I don’t think I’m in the right Coach and Horses.

ME: There is only one Coach and Horses in Soho!

JARED: Then where the hell am I?

JARED: I”ll be with you in TEN MINUTES.

So anyway, Jared finally joins me and even though I tell him I can only stay for ONE drink, it becomes about 3 and then I have about ten minutes to catch the eleven o’ clock train back to Bournemouth… I end up running barefoot through Waterloo up the escalators and through the main bit to platform 8 (where the Bournemouth train always seems to be). Whistle is going, a guard’s waving his arm and I’m yelling: “STOP THE TRAIN!” like in the movies… Somewhere in my exhausted (ahem) brain I think I can make it. Guard yells: “Don’t you dare!” and peels after me, grabs me round the waist and hoists me away from the closed doors. He then TELLS ME OFF as the train continues to chug away. “Get the midnight train you daft mare,” is his last advice to me, but all I can think of is The Midnight Meat Train. Yikes! (Yes, I watch too many movies, I KNOW). So to prepare for bloody death I decide to go to Burger King and meet a charming solicitor who gives me his number which I think is marvellous (you never know when you need legal advice or someone to represent you over *misunderstandings*) until I remember I’m a bit married and he probably gave it to me with less legal and more saucy intentions. Whoops.

So I FINALLY get on the midnight meat train but Vinnie Jones is nowhere in sight so I figure I’m safe… I blink and fall asleep for about forty minutes and wake up on THE GHOST TRAIN – and worst of all, it’s in Basingstoke. Everyone literally vanishes… Perhaps Vinnie is on board after all? But then a guy in a neon jacket appears and tells me to get off, there’s a replacement bus service between there and Winchester. So I trail off and he escorts me to the bus and yells to his mate driving: “STRAGGLER FOR YOU!” in front of EVERYONE. Le Sigh. The bus is of course freezing and I discover my iPod has a suspicious amount of Ibiza Anthems on it considering I only got it last week and can’t stand them – the boy spawn has undoubtedly been tinkering with it. So during the freezing bus journey I decided to see if Encore En Fois keeps you more warm than the likes of David Bowie. Result: no effing difference.

Back on the train at Winchester a mad female guard who’s obviously getting home for the night keeps trying to talk to me, but by this point my brain is melted and I HAVE NO IDEA what she’s on about. I just nod and smile and she keeps talking. Is this what it’s like to be me?? I wonder, Ever talking and people just nodding?? She gets off at Christchurch and I’m left alone for a blissful ten minutes until some mad man storms through with an wide-eyed eight year old boy chanting, presumably something to do with some kind of sport. Said kid offers me a crisp, I say no thanks, as I’m on a diet: “Why bother?” he says, “If you’re fat, you’re fat.” Marvellous. I finally get home just before 3am to find I have no keys and my Husband having an apoplexy – I said I’d be back at half eleven! My phone ran out of charge, I reply weakly – like a chastised teen. Double whoops. It’s all material though, right?

So that was my tuesday. How was yours?

12 thoughts on “All Aboard: The Night Train”